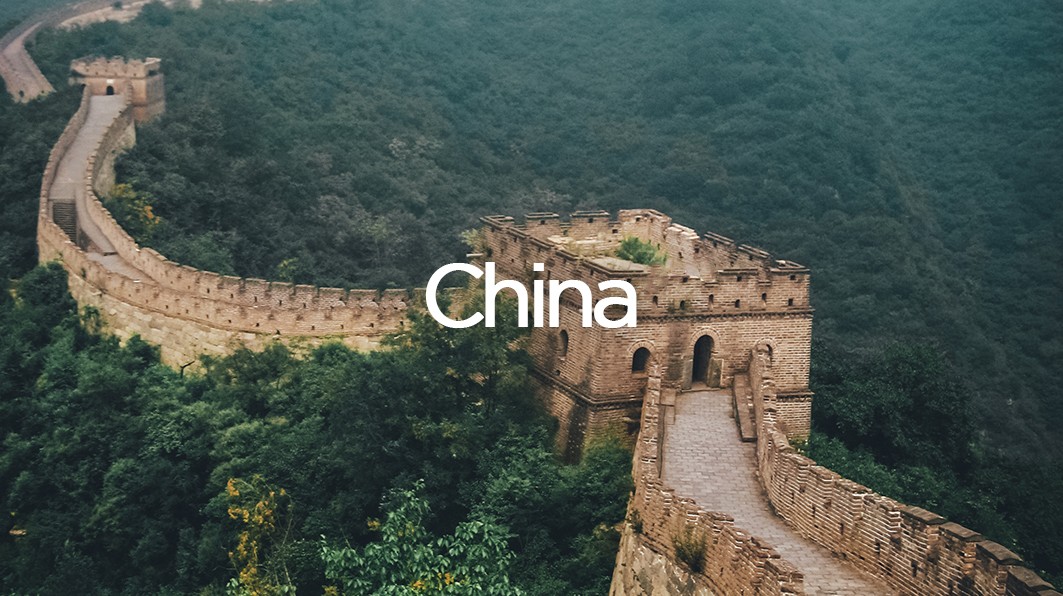 Big chapter of a world tour: China. The madness of big cities, a nature as varied as its immense territory allows, one of the oldest and most powerful civilizations and a fascinating history. China is an incredible playground for any backpacker who ventures there.

** TIPS PARCOURS **
As in all of our articles, we try to come up with a roughly coherent route that both allows you to see the most important places in the country while maintaining a logical route for travelers to get from one point to another. Here, we will start with the capital Beijing and then explore the East, the center, the South, the West and the North through several stages without order of preference or importance. Everyone is free to adapt his or her route according to his or her desires, his or her position of entry and/or exit of the country. 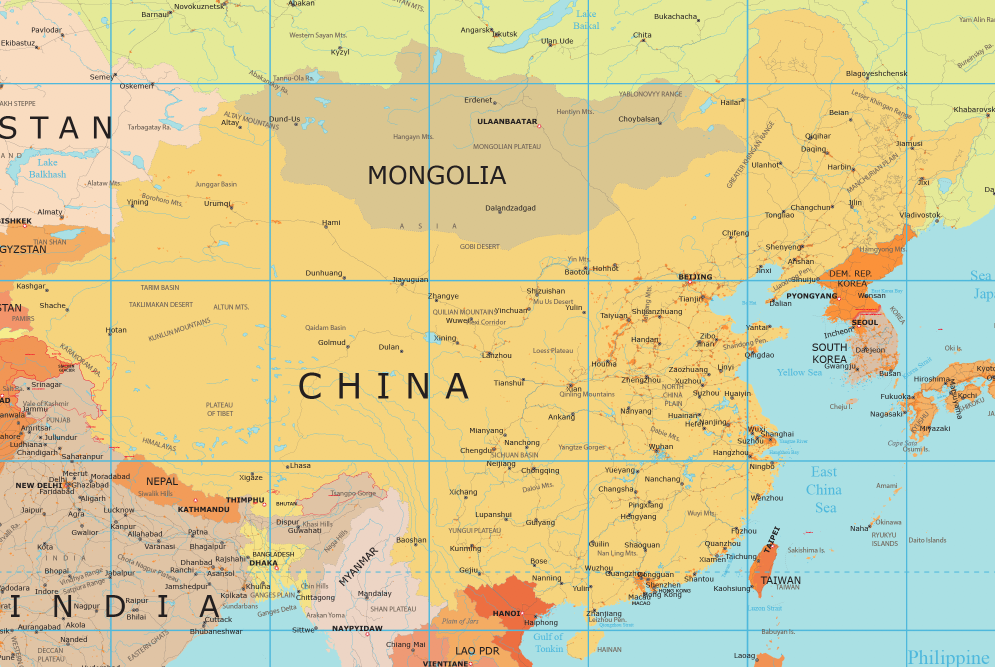 Beijing - The Great Wall (5/6d) :
The capital of the country, Beijing, is a huge megalopolis of more than 20 million inhabitants, very lively, day and night. On the sightseeing side, the program is heavy with the legendary Forbidden City which was the residence of the emperors for 5 centuries since the Ming dynasty. At the southern entrance is Tian'anmen Square with the monument to the people's heroes and the Mausoleum of Mao Zedong. Qianmen street is the tourist street of Beijing with stores and restaurants for 800m and small perpendicular streets less crowded and less expensive. Continue south to visit the Temple of Heaven, symbolizing the connection between heaven and earth.
The Yonghe Temple (Lama Temple) is a Tibetan temple where you can meet monks living there and the Confucius Temple, not far away, is the 2nd most important temple dedicated to the Chinese thinker in which there is still an imperial school.

Beihai Park was once a private imperial garden (over 1000 years old) and is now a public park that can be visited on foot or by bicycle. It consists of a huge lake, Northern Sea, on which is located the island of Qiongdao. Sublime and relaxing.

The Summer Palace is the other big visit that will take you half a day with its large parks and temples, pavilions, halls and bridges of classical Chinese architecture. To the east is the ancient Summer Palace in Yuanmingyuan Park with also lakes, canals and various pavilions but although they are close, it is difficult to do both palaces in the same day.

The Hutongs are the traditional labyrinthine districts with small streets that are really nice to discover and see some authentic life with its inhabitants.

One day tours are organized from Beijing to the Great Wall of China. It is a must-see. Several sections of the wall are offered, at different distances from the city but you can also do it by yourself by going to a closer city like Simatai. Once on the wall, you will have the opportunity to walk up, down and up and down again but don't expect to see the end of it, this wall is endless! 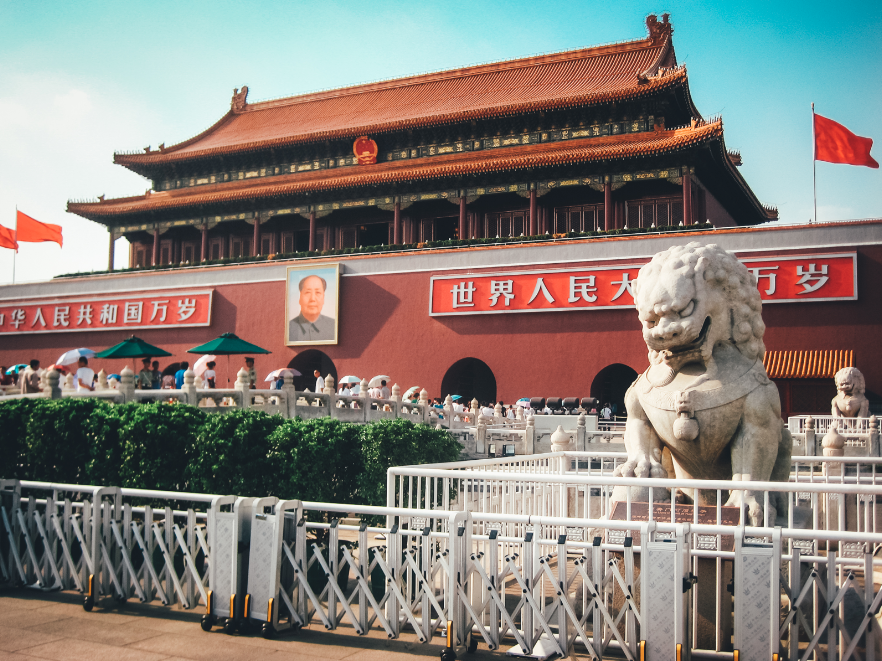 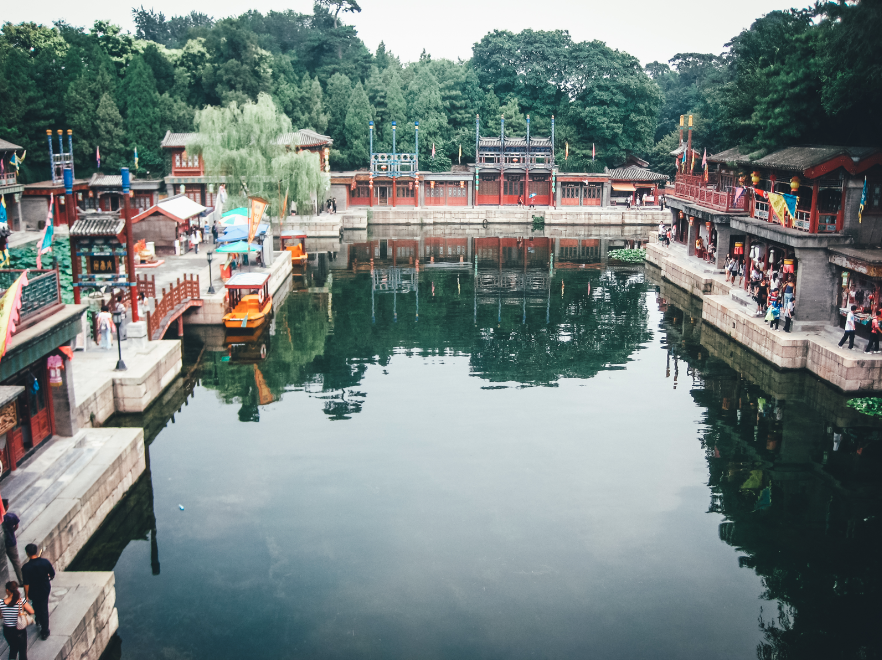 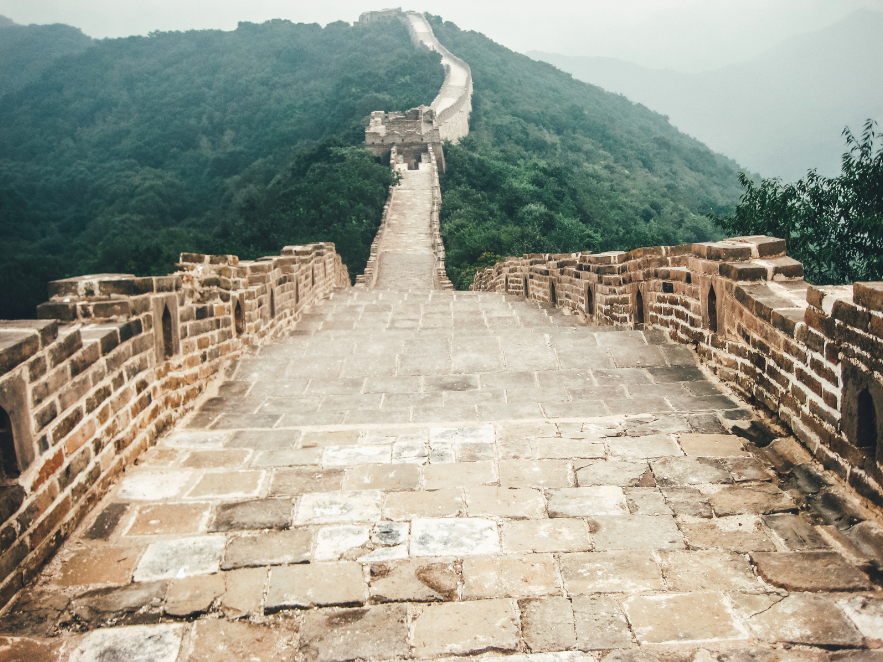 Shanghai (2/3d) :
Another huge city: Shanghai with the Bund, in the touristic center of the city, along the Huang Pu Jiang river (on which it is possible to take a cruise) and which overlooks Pudong and Lujiazui, the business center with its emblematic tower "The Pearl of the Orient" that you can visit to observe all Shanghai. People Square is in the center and overlooks East Nanjing Road and a number of shops and buildings such as the Shanghai City Hall, the Opera House, the Fine Arts Museum and the Shanghai Museum.
The old city is located near Renmin Lu and is made up of ancient narrow streets called "Longtang" which takes us back in time to the Chenghuang Miao, a temple of the city god. Nearby is the Yuyuan Garden, the city's most beautiful park dating back to the 16th century, and the Dongtai Lu flea market in the Luwan district, ideal for those who want to buy antiques or just for the look.

Visit the lively area of the former French Concession with its many stores, cafes and Fuxing Park, a French-style garden. Tianzi Fang is a modern and artistic area with many stores, cafes and Shikumen, traditional houses from the 1930s. In the south of the city is the Longhua Temple, the largest Buddhist temple in Shanghai with its pagoda built in 282 AD, destroyed and rebuilt many times during the Qing Dynasty.
Finally, on the outskirts, you can visit some water towns, these villages with traditional Chinese architecture crossed by water canals. Here are some names: Qibao Ancient town, Zhujiajiao, Suzhou, Xitang Water Town, Zhouzhuang Water Town... 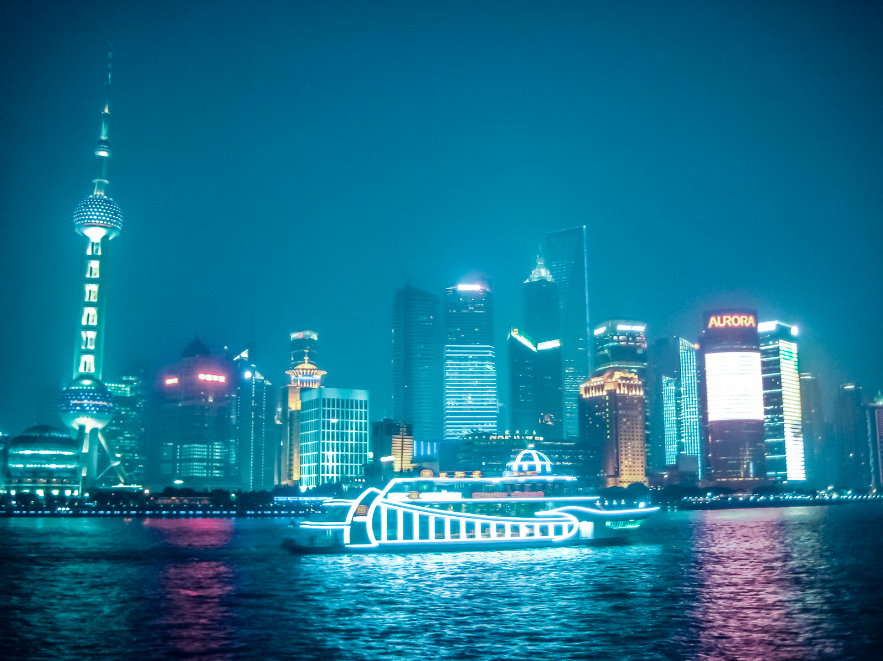 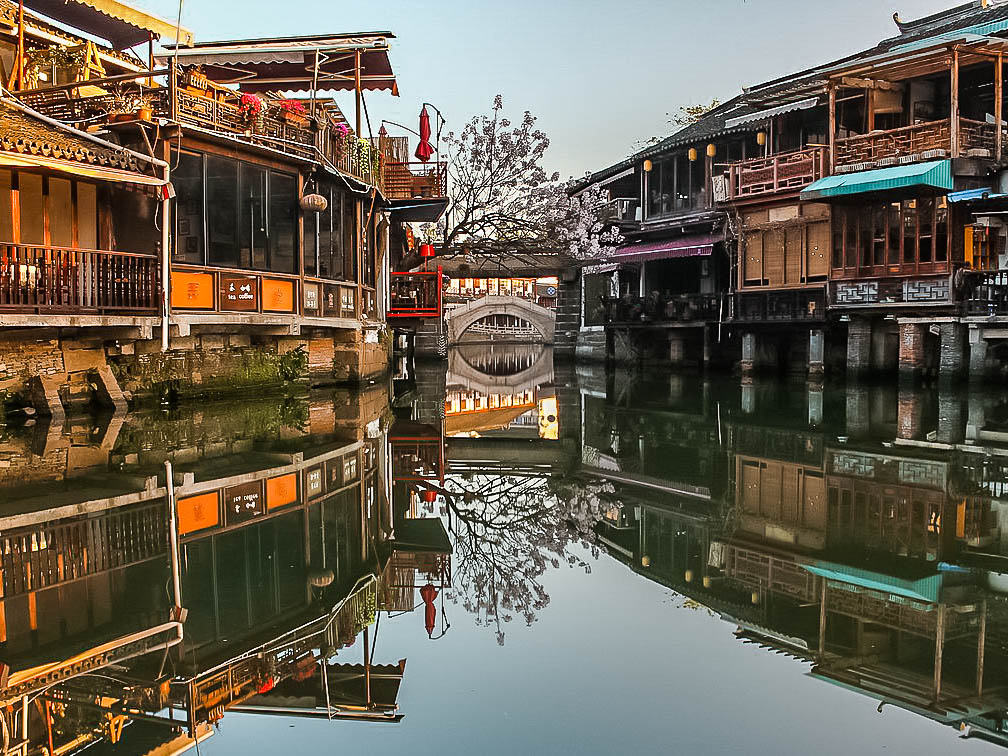 Huang Mountains (3d) - Zhangjiajie (2d) - Yangshuo (3d) :
Huang Mountains or Yellow Mountains are a massif in Anhui region which welcomes many tourists who come to hike through its multiple paths that lead to the heights. The landscape is grandiose with this mist that scrolls over these rocky peaks.

Zhangjiajie is a park of a unique beauty, registered with the UNESCO in the province of Hunan. Rocky peaks covered with vegetation give a mysterious air to this place that can be discovered via bridges and glass walkways.

Yangshuo is another magical place with an abundant forest covering rocky peaks crossed by the Li River. You can go down the river by raft or hike or bike through the area. 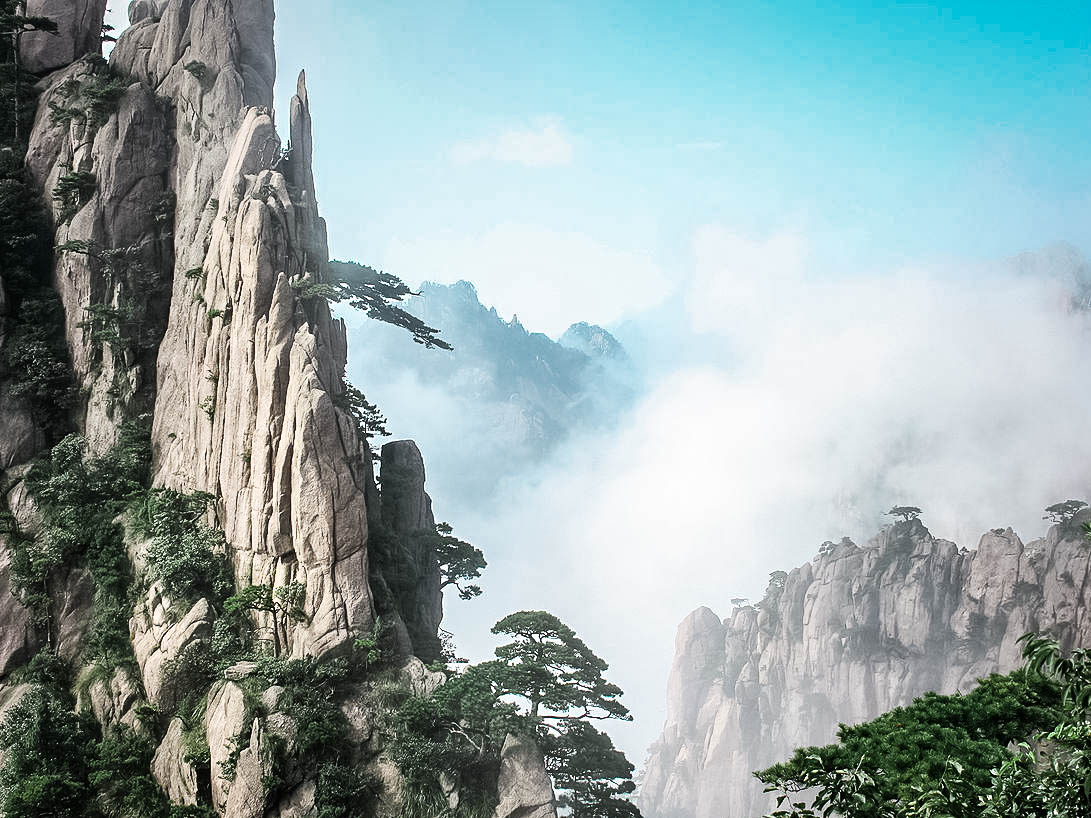 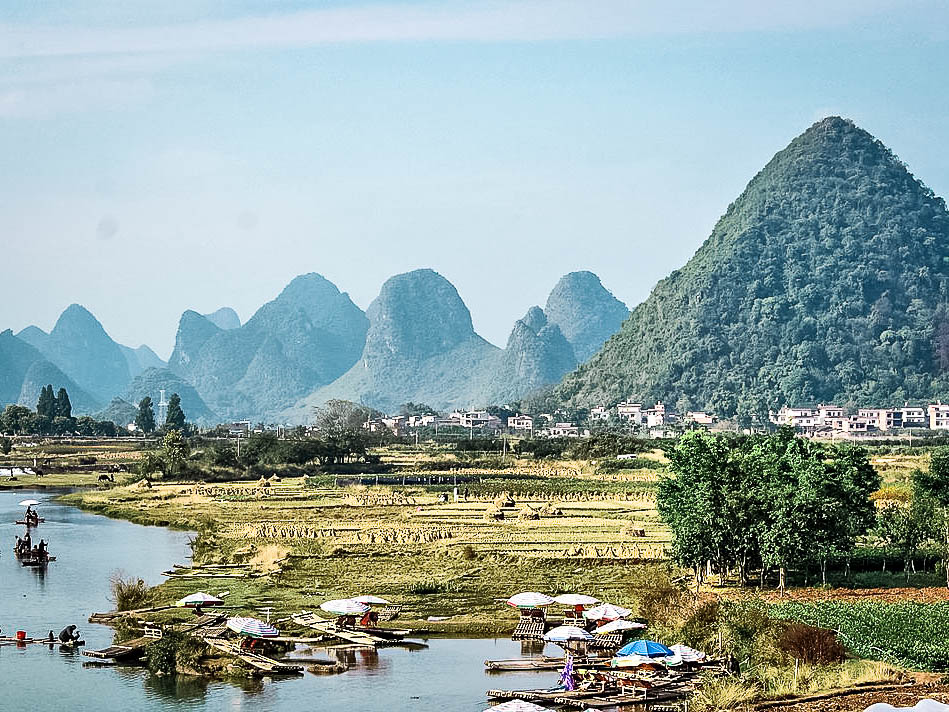 Yunnan : Yuanyang (2d) - Shaxi (2d) - Tiger Leaping Gorge (3d) - Shangri-La (2d)
In the south of Yunnan province, Yuanyang is a real spectacle for the eyes with its rice terraces created by the Hani. You will first have to pass through Xinjie town, then choose your viewpoints (for a fee) between Duoyishu, Laohuzui, Quanfuzhuang and Bada. You can also explore the area on your own through the trails and discover remote villages.

Shaxi is a traditional village that used to be a stopover for travelers between China and Tibet. You will enjoy the remote atmosphere, especially on Friday, the market day when the locals come to sell their goods.

Tiger Leap Gorge is a high mountain surrounding the Yangtze River, 100km from Lijiang city. A 2-day trek allows you to enjoy the scenery close to the river, but you can also approach it from the road.

Shangri-La is located at 3600m of altitude and you will find there a particular serenity with an old city with narrow and paved streets, its Gedan Songzanlin monastery and its lakes, and its Tibetan villages. Mystical atmosphere. Cut off from the world. 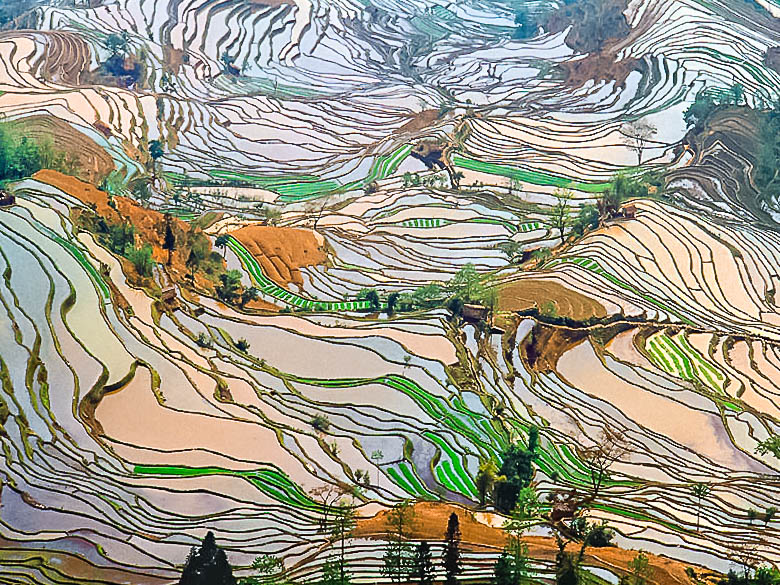 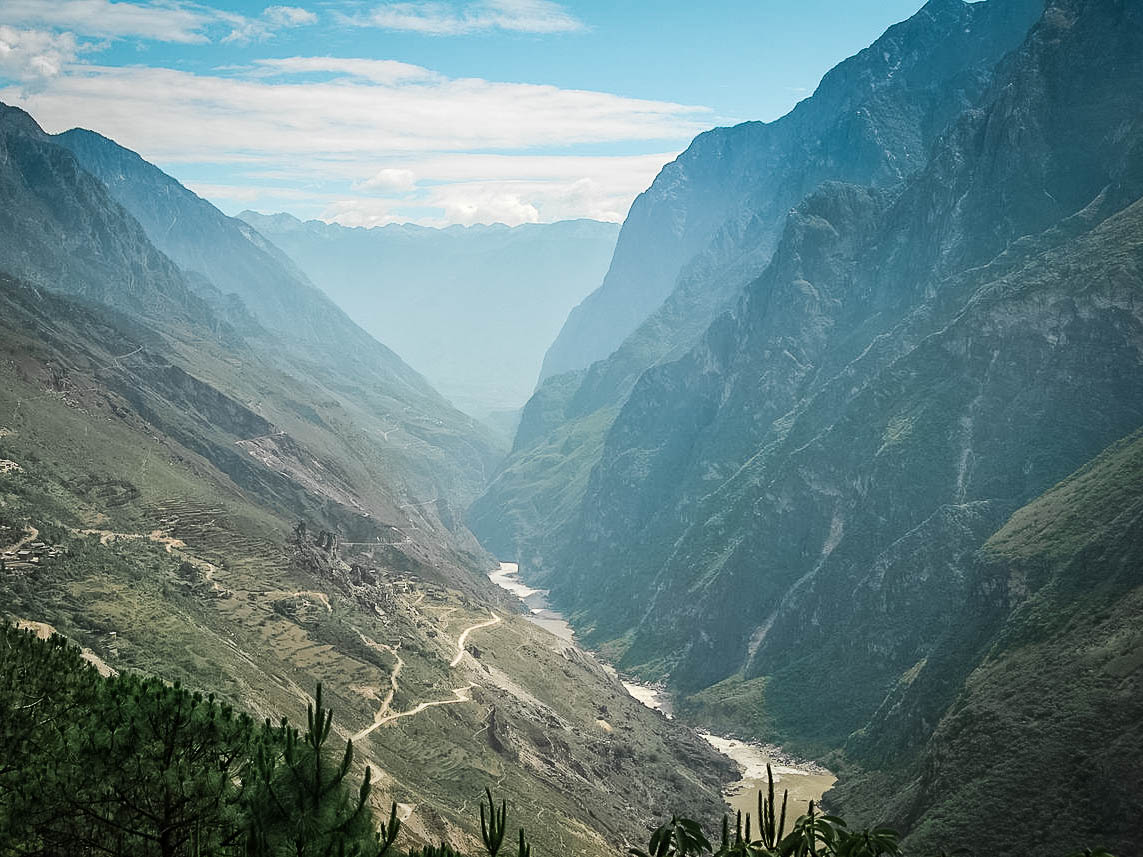 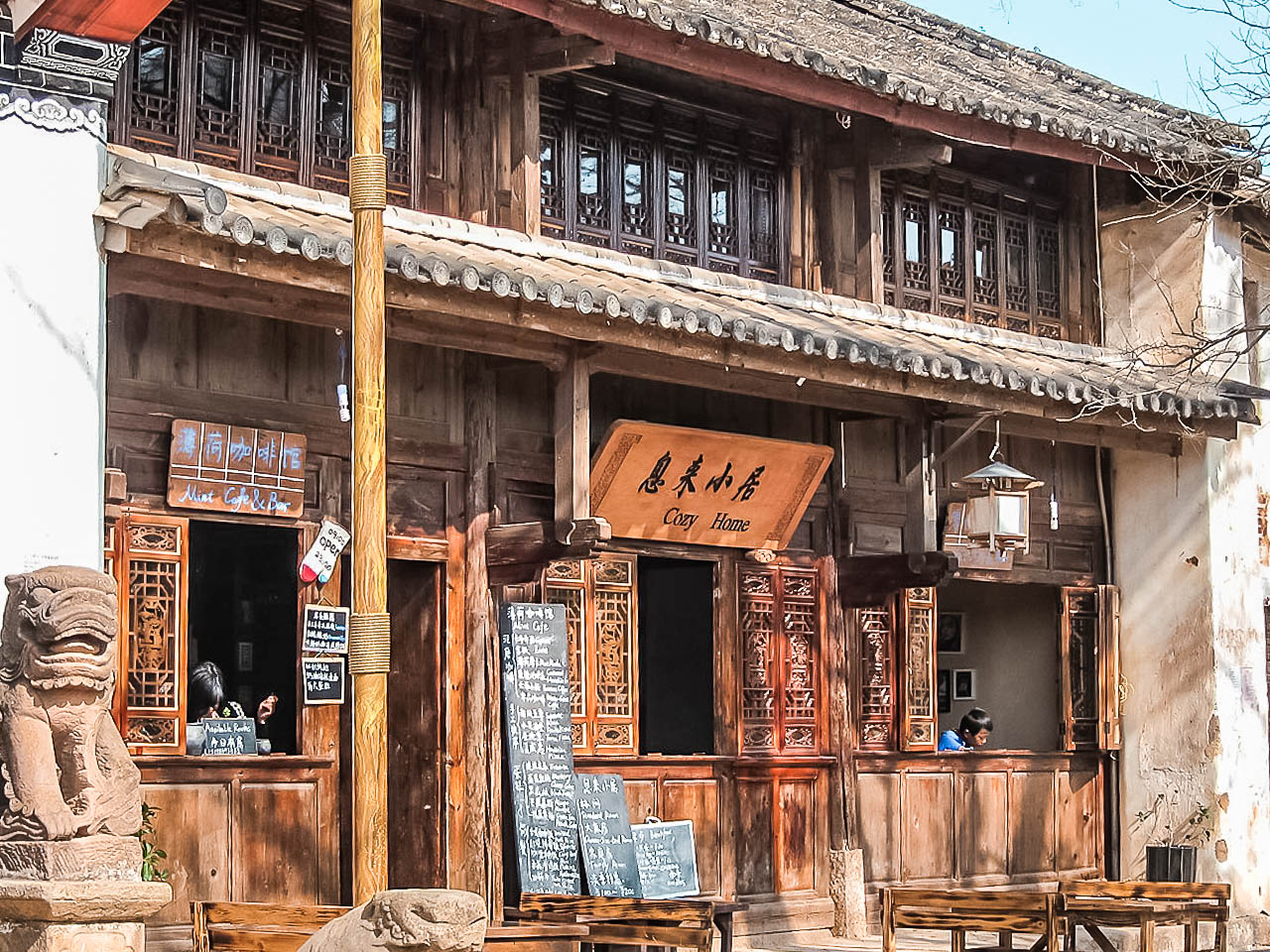 Tagong is at 3700m altitude in the west of the region and will also bring you serenity with its temples and monasteries. On the nature side, many hikes are possible in the region with huge plains and yaks present everywhere. 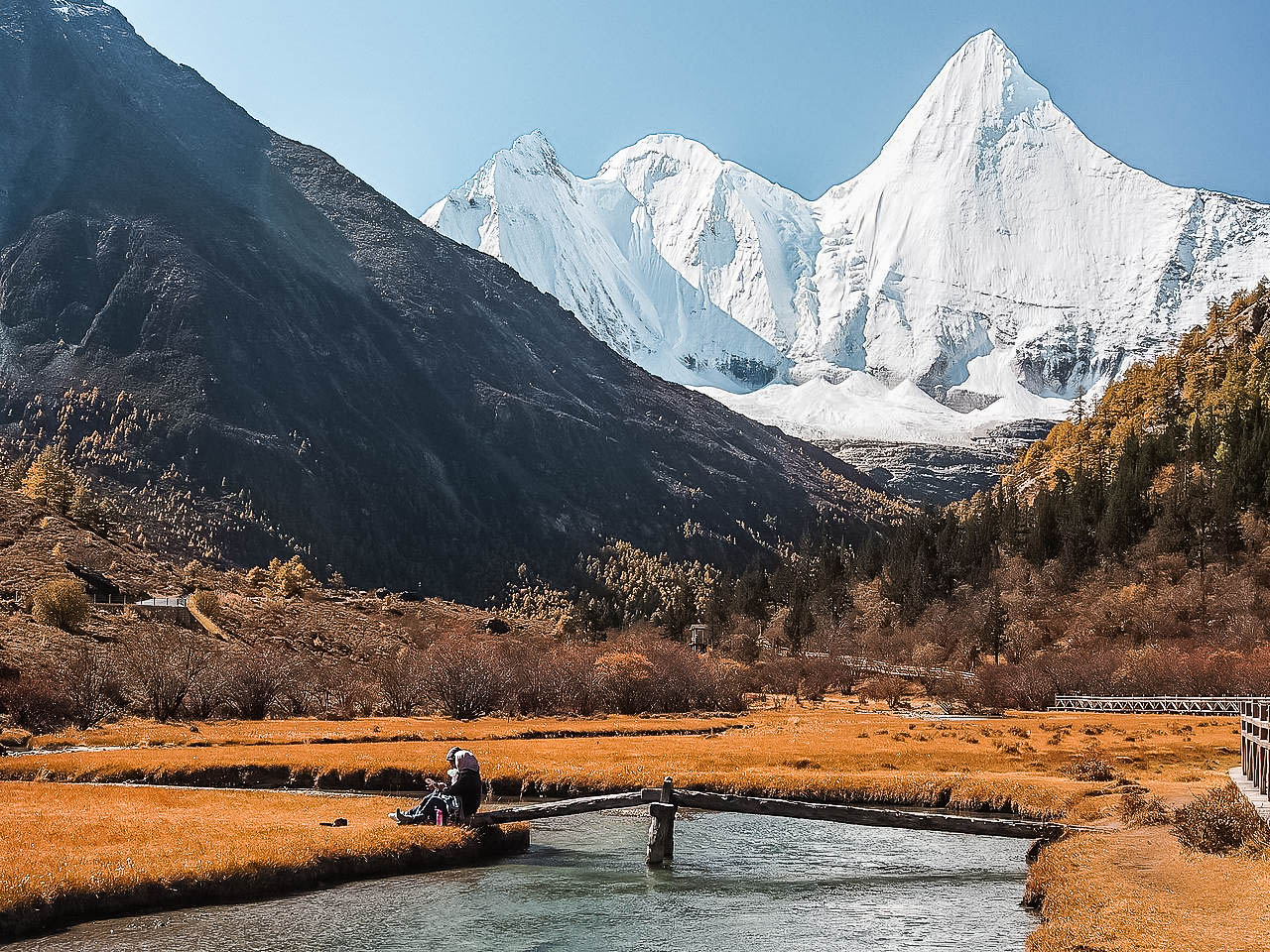 Lhasa (4/5d) & Mount Everest (3d) :
Welcome to the autonomous province of Tibet and one of the highest cities in the world, Lhasa. The Potala Palace is a symbol of the region and a major place of Tibetan Buddhism. From the top of the Potala Palace you can see the whole city and don't miss the Sera Monastery, the Jokhang Temple and the Norbulingka Gardens. The city is fast becoming modernized but the old city still has its own atmosphere. We are here in a place of pilgrimage so you will find many monks.

Mount Everest fascinates just by the sound of it. The roof of the world (8848m) lies on the border with Nepal and you have to be an experienced trekker/mountaineer to get to the top. The access to Everest Camp Base is sometimes forbidden by the Chinese authorities, so you have to follow the news concerning this point. However, you can still enjoy sensational views in the distance at Rongbuk Monastery. A feeling of plenitude is guaranteed. 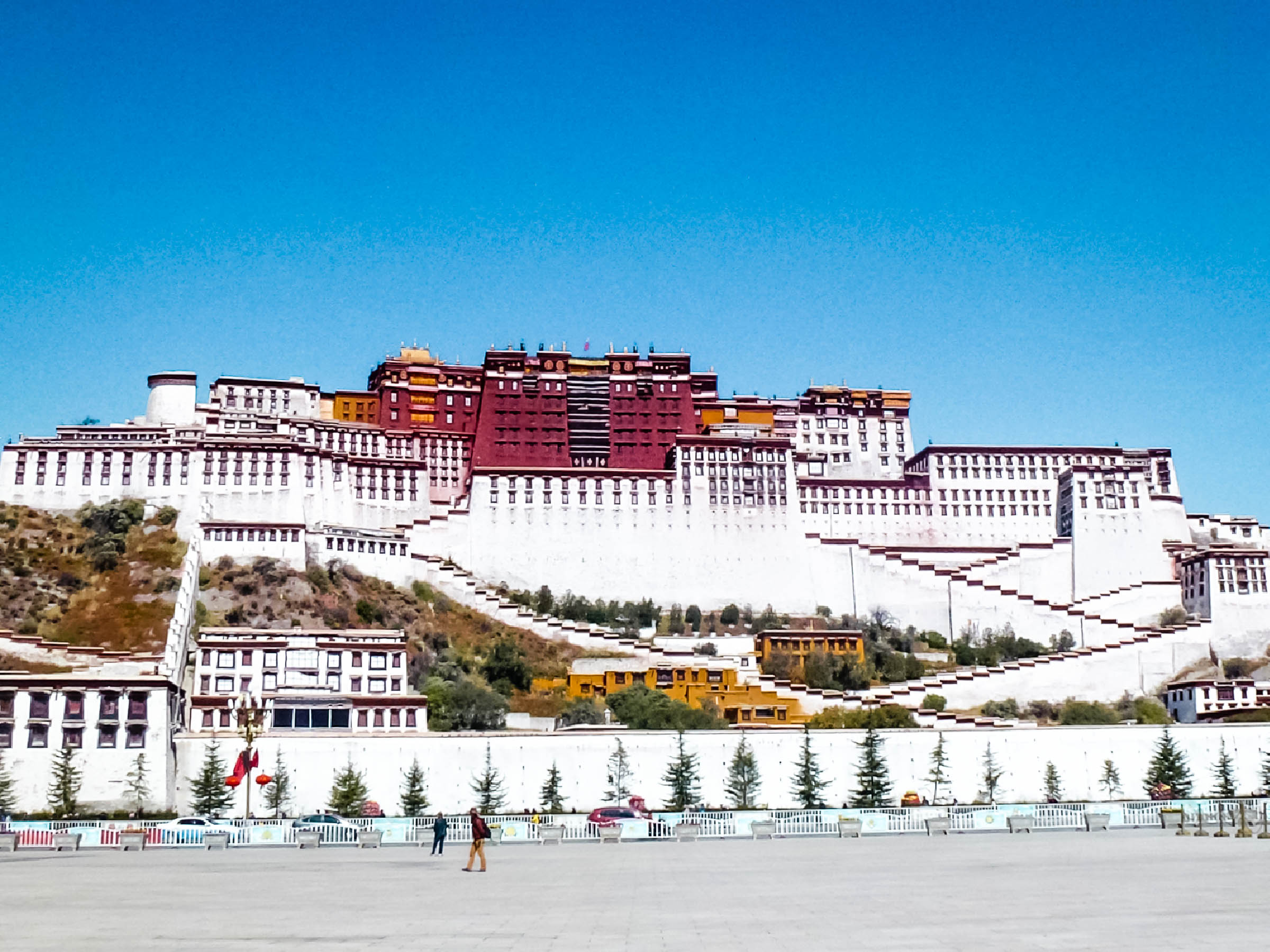 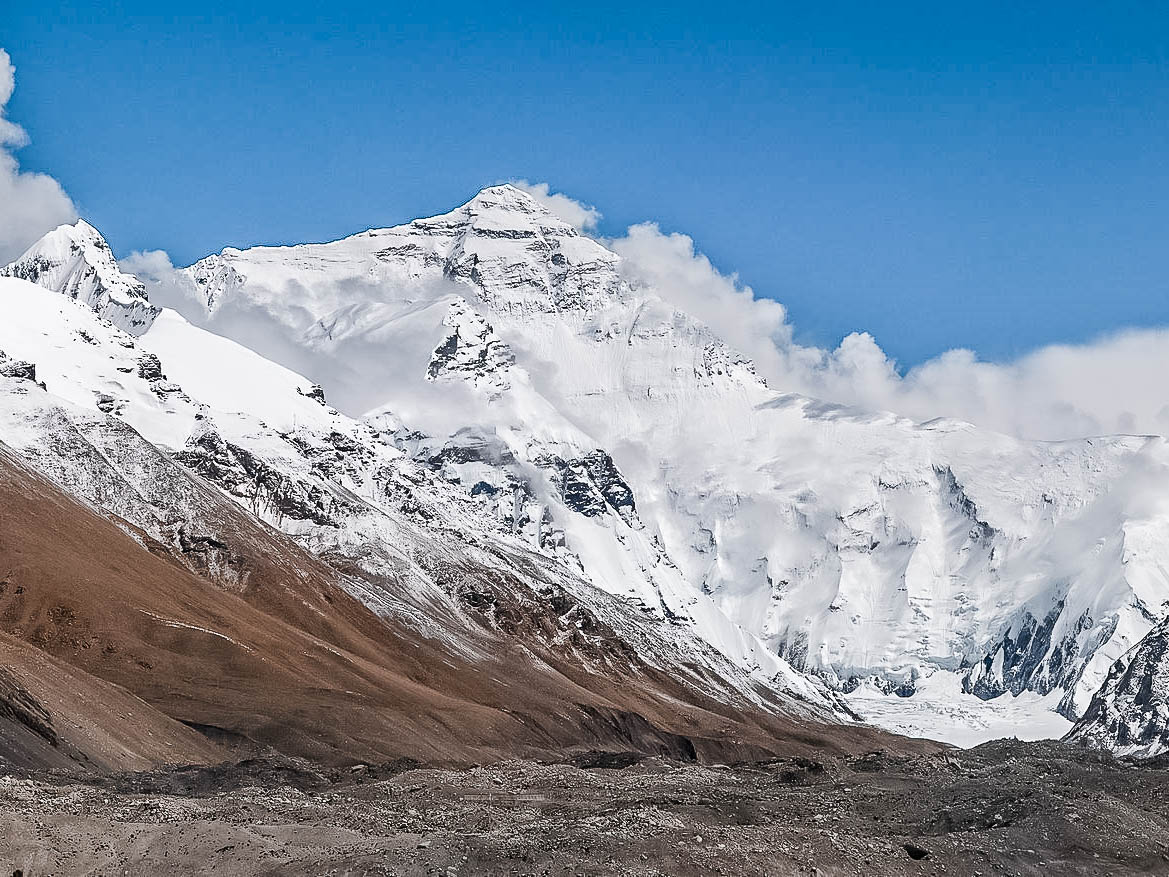 Kashgar (3d) :
For once, let's allow ourselves a domestic flight to Kashgar, in the Xinjiang region in the far west of the country near the Kyrgyzstan border. Kashgar is an oasis city near the Taklamakan desert famous for its Sunday market where vendors come from all over Central Asia. It is a mainly Muslim city with an Uyghur population who still live in traditional Gaotai type houses. Take the opportunity to see the Idkah Mosque, the largest in China as well as the tomb of Abakh Hoja. 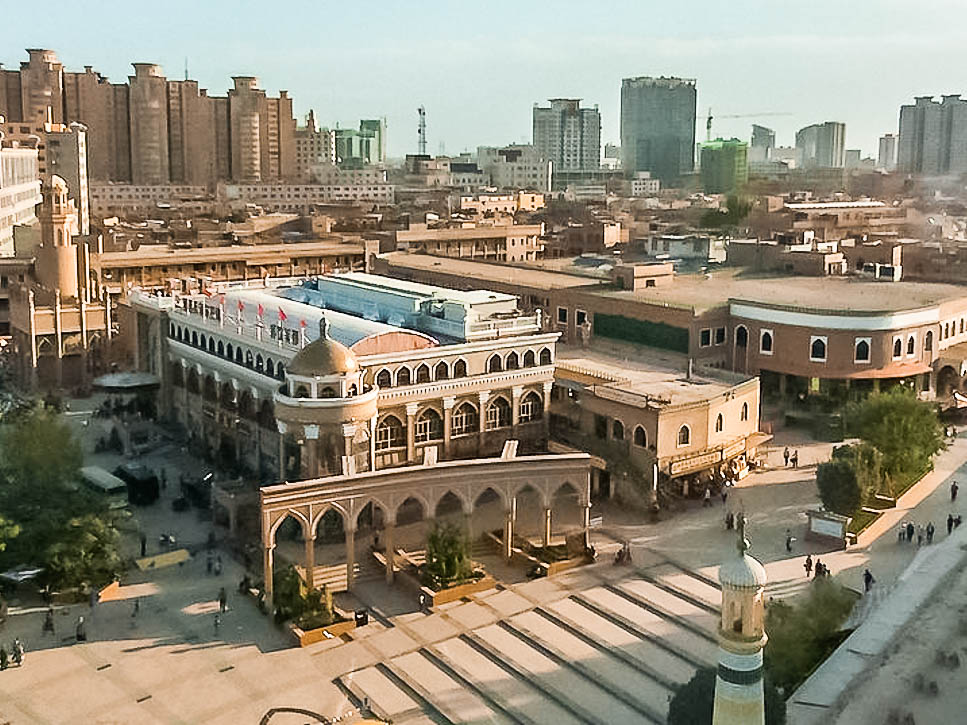 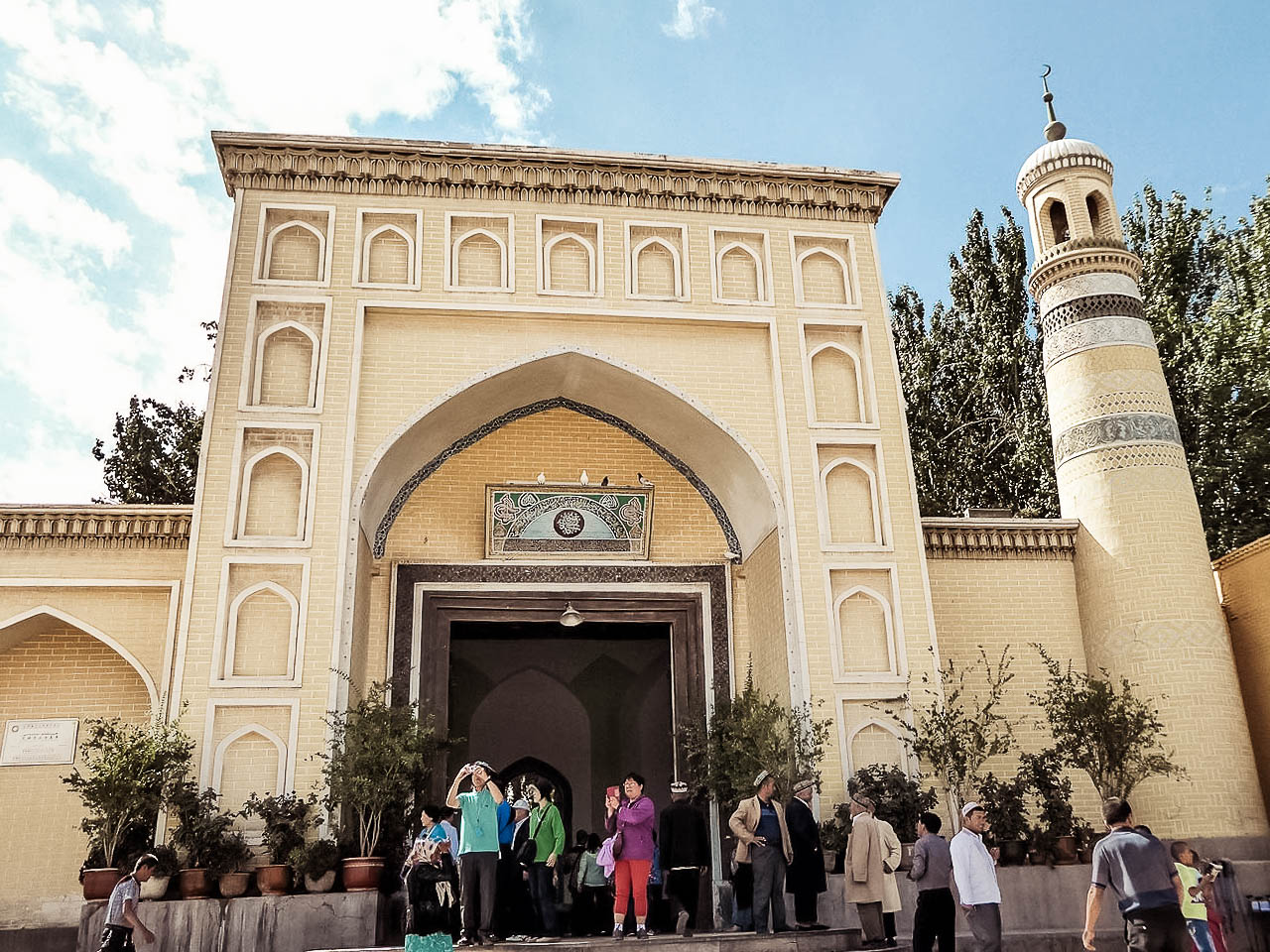 Gobi Desert (3d) :
Another flight to get to Bayanuur to then head to the Gobi Desert which straddles China and Mongolia. Few tourists come to this side of the country but there are however agencies that offer tours in small groups to meet the inhabitants or even sleep in a yurt. 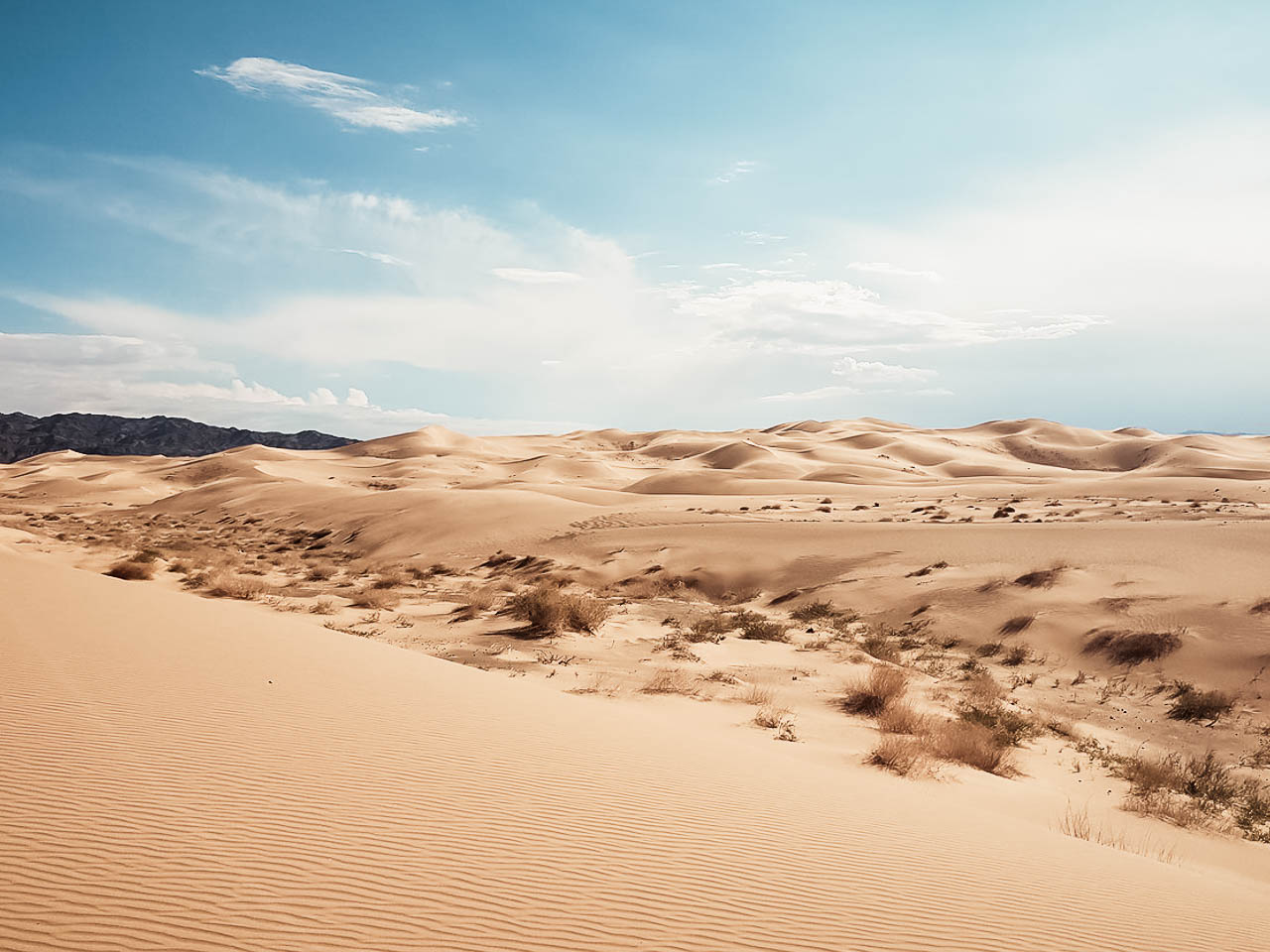 Monastery of Labrang (2d) :
Back to the center of the country in the Gansu region near the city of Xiahe with the visit of Labrang Monastery, a school of Tibetan Buddhism which has the largest number of monks in the country after Tibet. Perfect to learn more about the way of life of its monks and about Buddhism in general.

Shaanxi : Xi'an (3d) & Mount Hua (2d)
The city of Xi'an is famous for the famous terracotta army that accompanies the tomb of the Qin emperor, which is an incredible sight to see. The city has a fascinating cultural and historical heritage with its Great Mosque, the Great Wild Goose Pagoda, its Stelae Forest Museum and its old town that can be discovered on foot or by bicycle.

About 100km from Xi'an, there is one of the 5 sacred mountains of China, Huashan (Mount Hua), the Western Mountain. The way to the top is rather rough but you can take breaks in Taoist temples. Finally, from the top of 2160m, a panoramic view of the surroundings will amaze you. 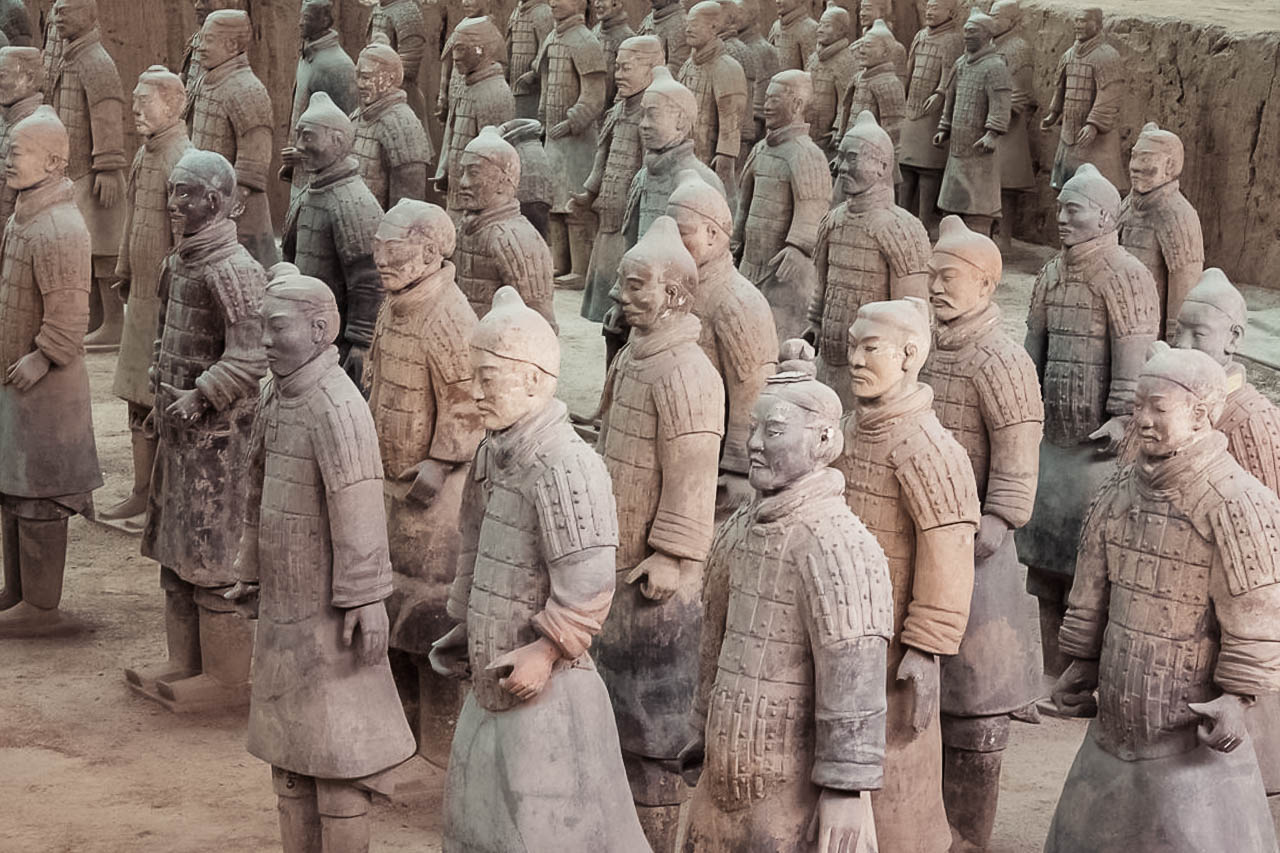 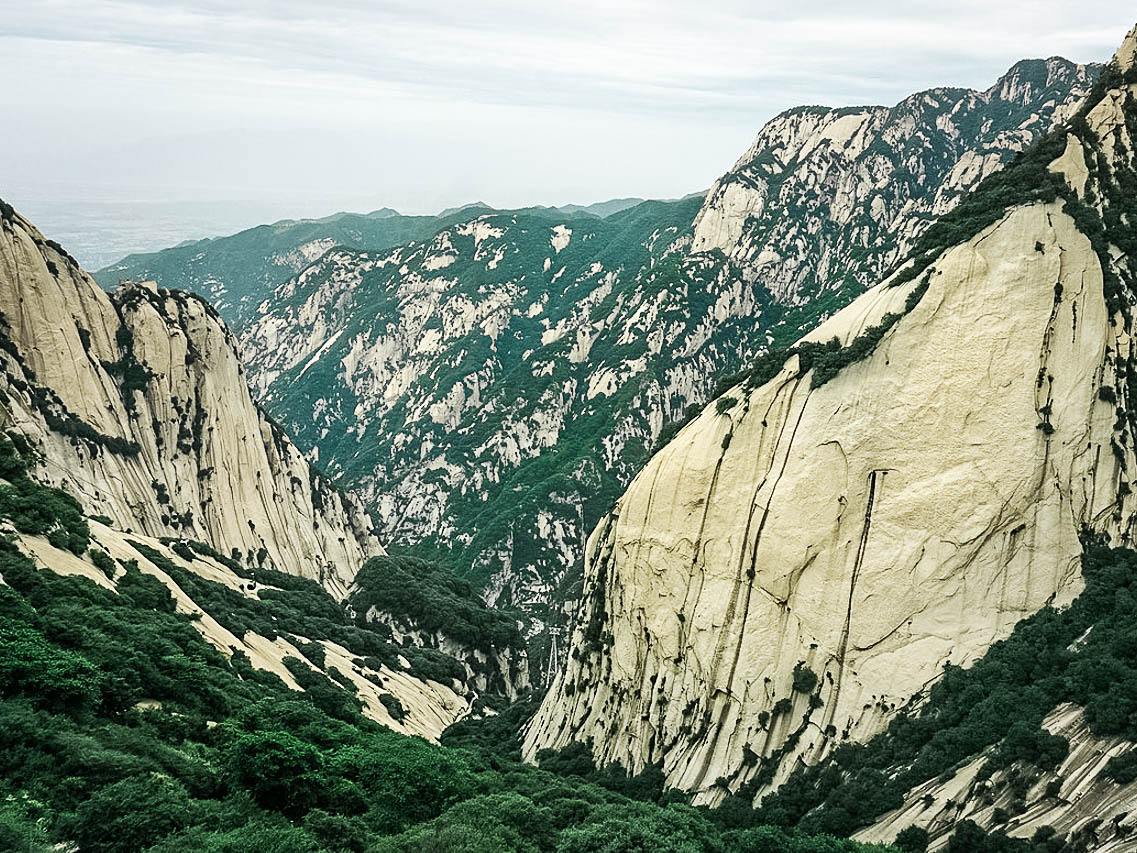 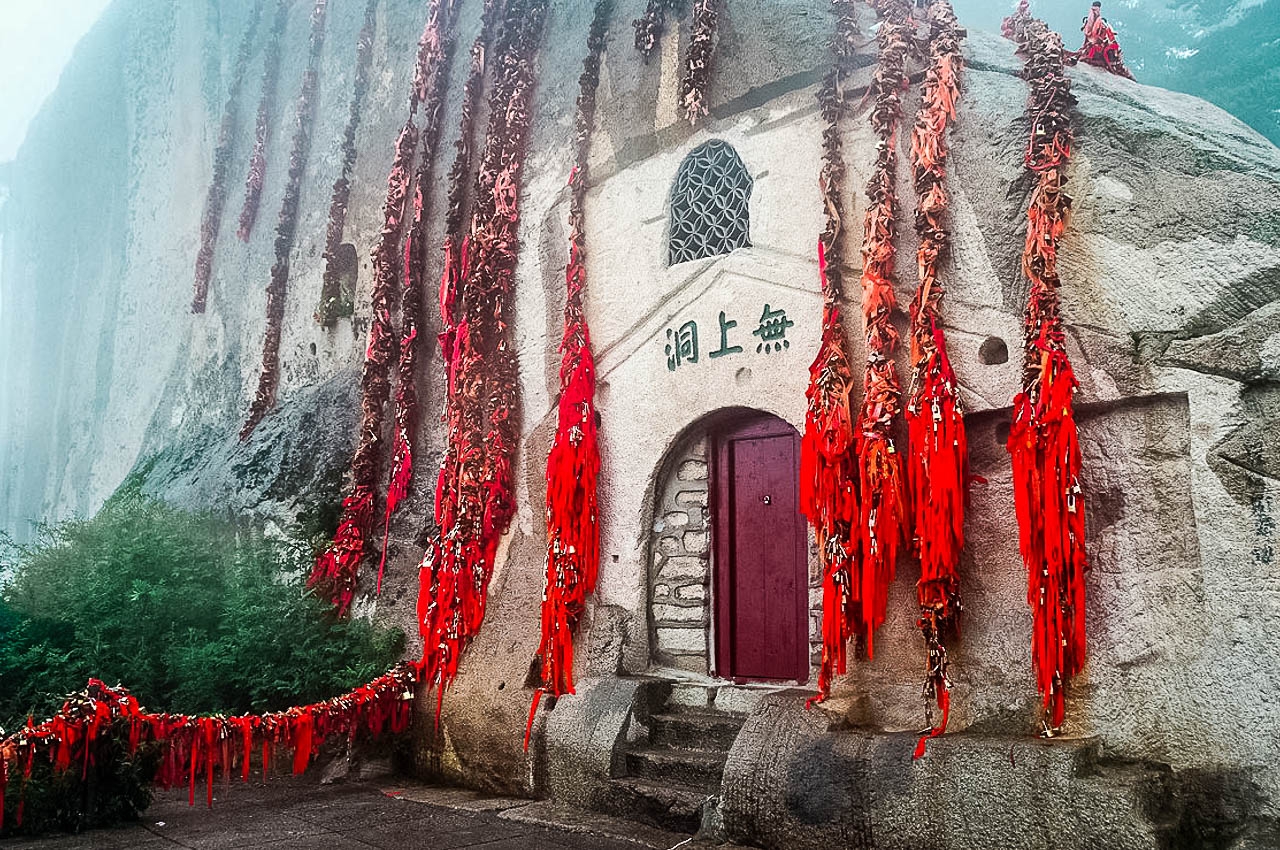 And more :
China is a continent by itself and if you have more time, don't hesitate to branch out here and there between more and more fantastic landscapes like Jiuzhaigou or those big cities like ChengDu, Kunming, Lijiang or straight out to the special region of Hong Kong or Macau. 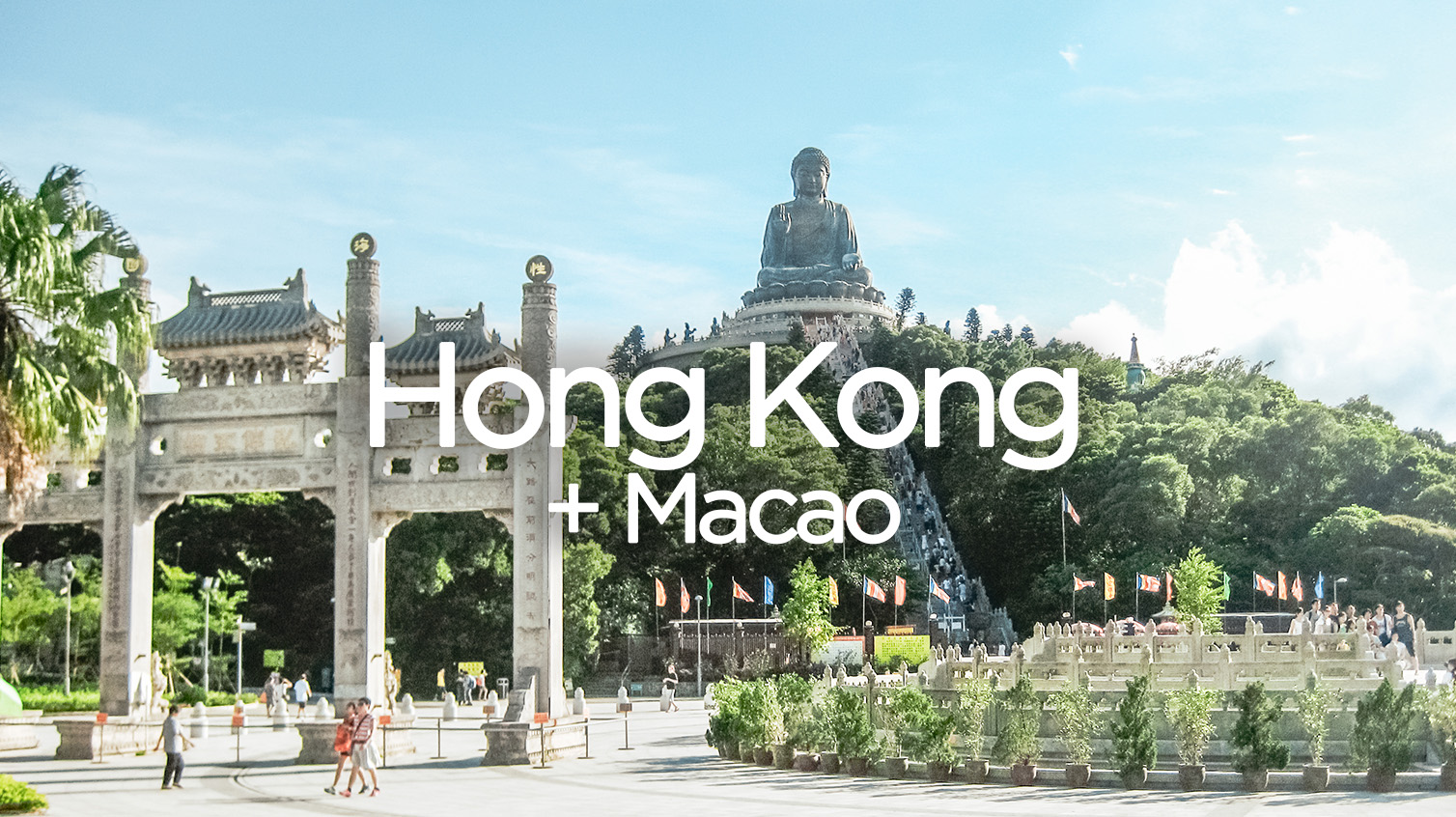 Outro :
Prepare yourself for the total change of scenery in the remote parts and the mass madness in the big cities. China is a cultural and historical wonder to discover and offers a diverse nature to its visitors. Dive into its depths and go back in time with its still well preserved traditions.