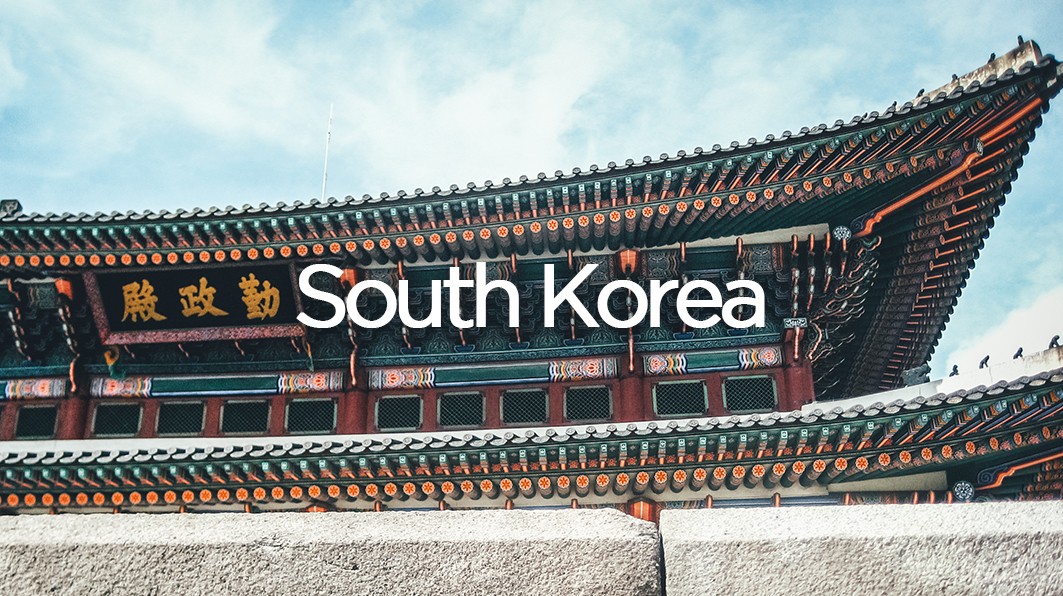 South Korea doesn't really attract travelers and yet it is a country that deserves more attention, wedged between the huge China and the avant-garde Japan. South Korea has its own culture, its own gastronomy, its own alphabet and a curious and sad history with North Korea, which makes it an even more interesting destination.

** TIPS COURSE **
As in all our articles, we try to imagine a more or less coherent itinerary that allows us to see the most important places of the country while keeping a logical route for travelers who want to go from one point to another. Here, we will start with the capital Seoul and then explore the rest of the country, ending with the South and passing through several stages without order of preference or importance. Everyone is free to adapt his route according to his desires, his position of entry and/or exit of the country. 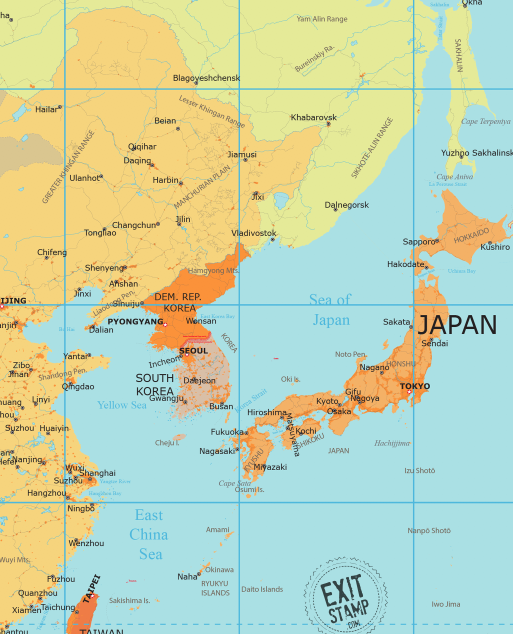 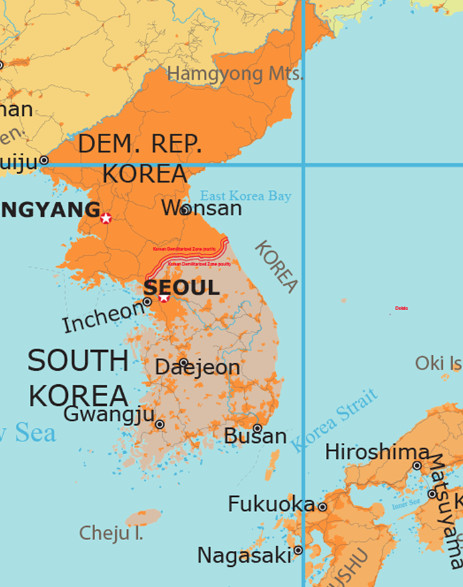 Seoul - the DMZ (5/6d) :
Seoul is one of those capitals that are more experienced than visited. So take the time to chill out in the lively districts like Hongdae, Insadong, Gangnam and Itaewon with their numerous shops and cafes, and enjoy the nightlife in the various bars and clubs of the city. In the meantime, there are some very nice green palaces to visit all over the city, the most important of which are Gyeongbokgung and Changdeokgung, which were badly damaged by the Japanese but rebuilt afterwards. The second one also has beautiful gardens called Huwon Gardens. In the first one, you will be able to attend the changing of the guard, which remains an interesting spectacle. (11 am and 2 pm). Between these two temples is the Bukchon Hanok Village area with traditional houses of the past. There are also many Buddhist temples here and there like Jogyesa temple or Bongeunsa temple with typical Korean architecture.
Go to the top of Lotte Tower for a panoramic view of the whole city and the mountains in the distance which is one of the 10 highest buildings in the world with its 555m. Another panoramic view to do by day or night, from the N Seoul Tower, located at the top of the hill. Cheonggyecheon is a rather pleasant 5 km walk in the city center on the banks of a river so you might as well enjoy it. The war memorial and its museum are a very interesting passage to understand the history of the country and the war between the 2 Koreas, influenced by communism on the one hand and by the Americans on the other hand.

From Seoul, excursions are proposed for the DMZ, the demilitarized zone at the border of the 2 Koreas. You will discover the DMZ and its surroundings, the Dorasan station, the viewpoint of North Korea, the tunnel, JSA, etc. You can't go there by yourself and only some agencies are allowed. 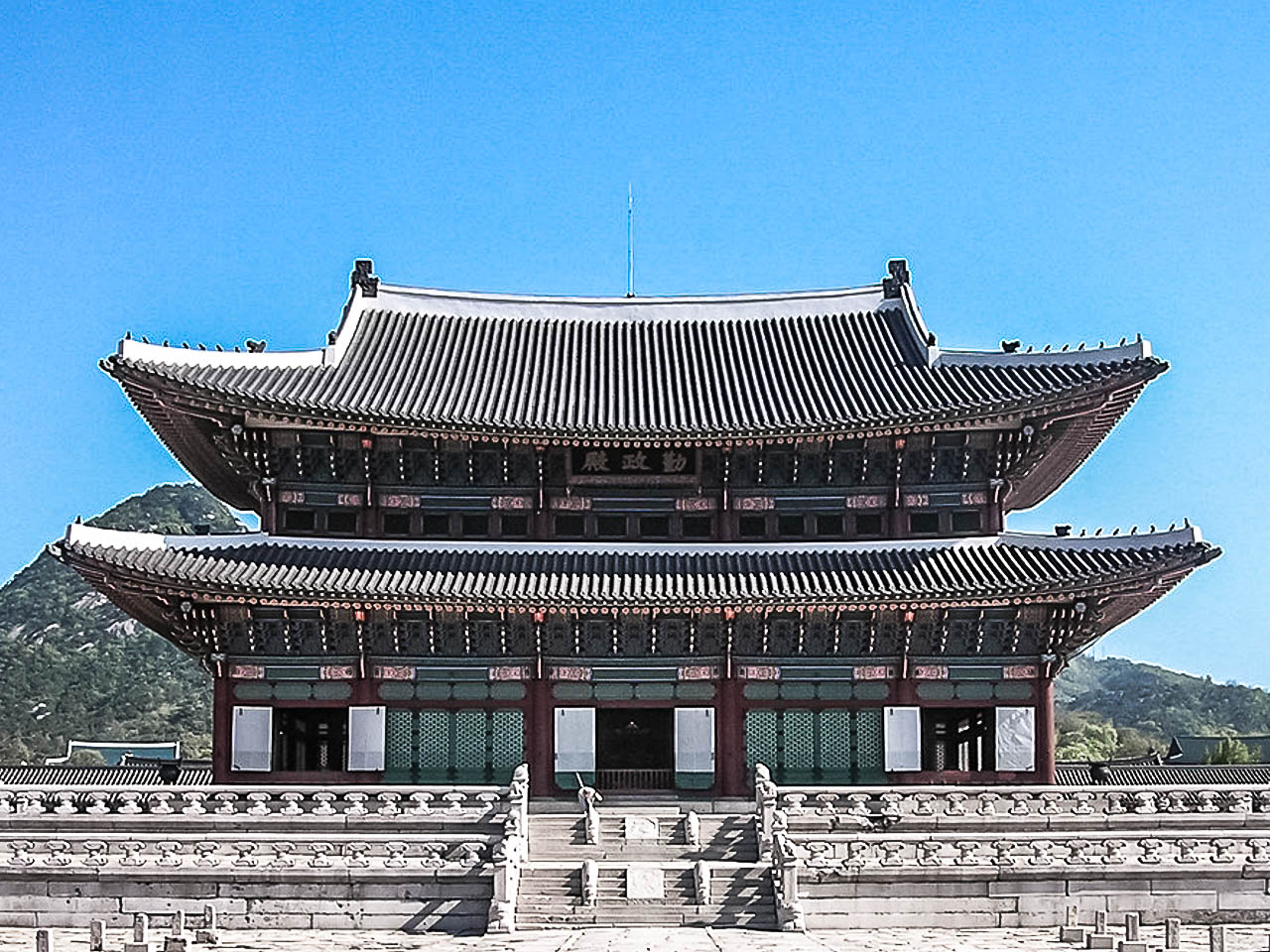 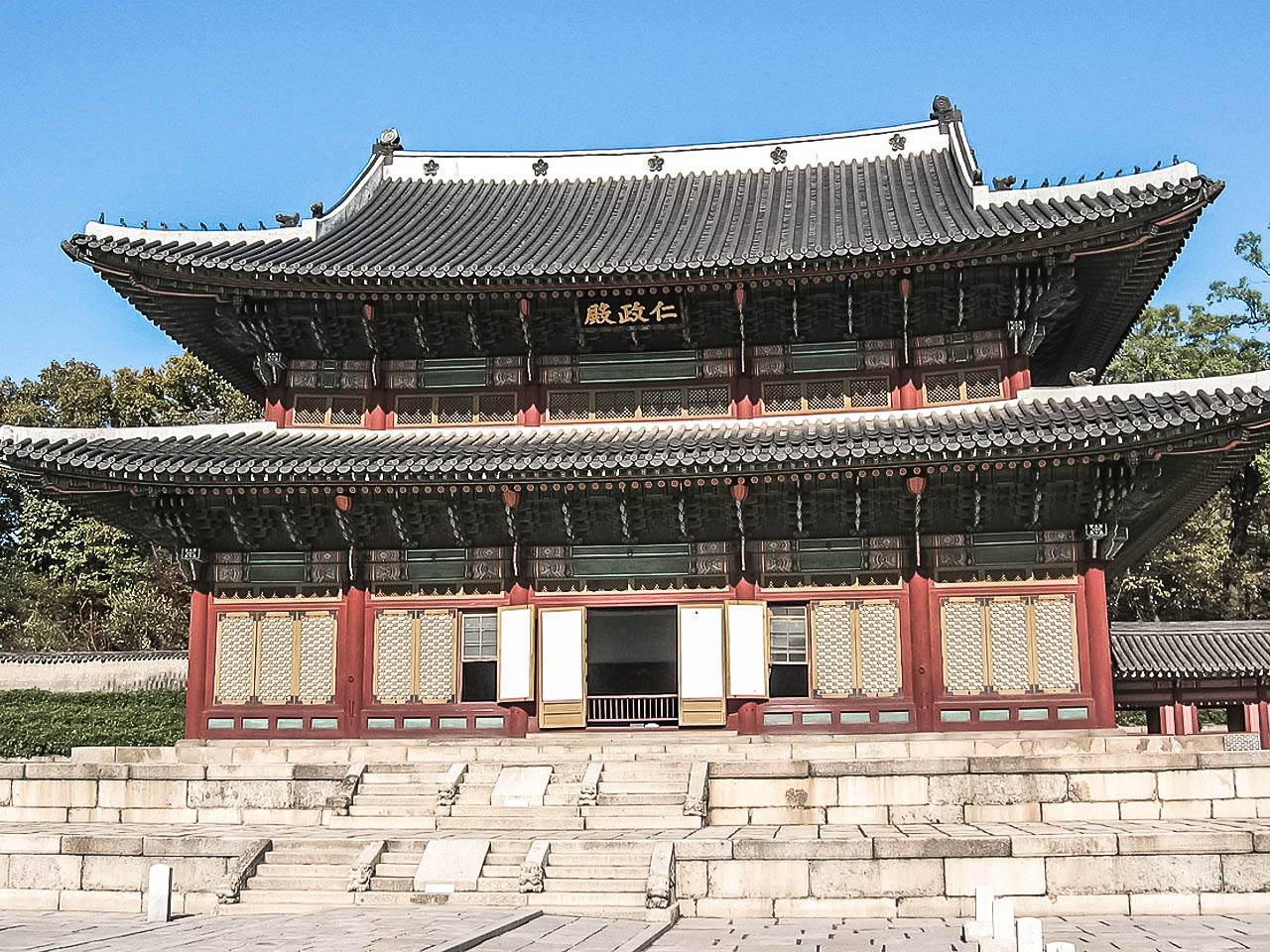 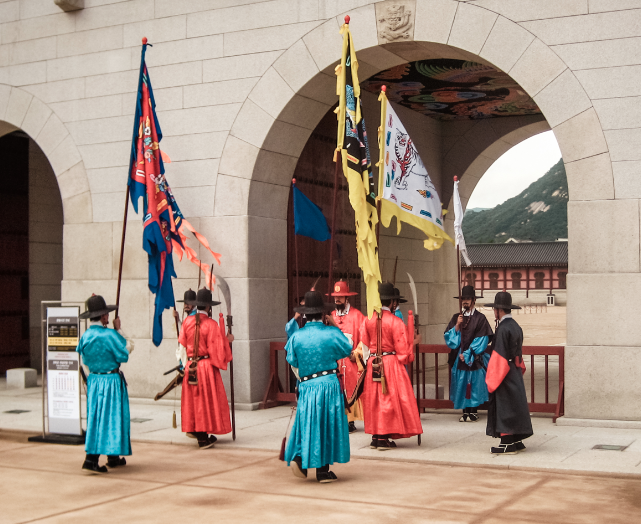 Seoraksan Park (2-3 days):
Near the city of Sokcho is the most beautiful park of the country, Seoraksan Park, in the middle of the Taebek mountain range which crosses the Korean peninsula. It is composed of about thirty mountains whose highest peak, Daecheongbong, is at 1708m and whose hikes will bring us to the top of Ulsanbawi for a panoramic view, in front of a giant statue of Buddha, to visit the Sinheungsa temple, the Gwongeumseong fortress and waterfalls. A varied program! Excursions are possible from Seoul if you don't want to go by yourself. 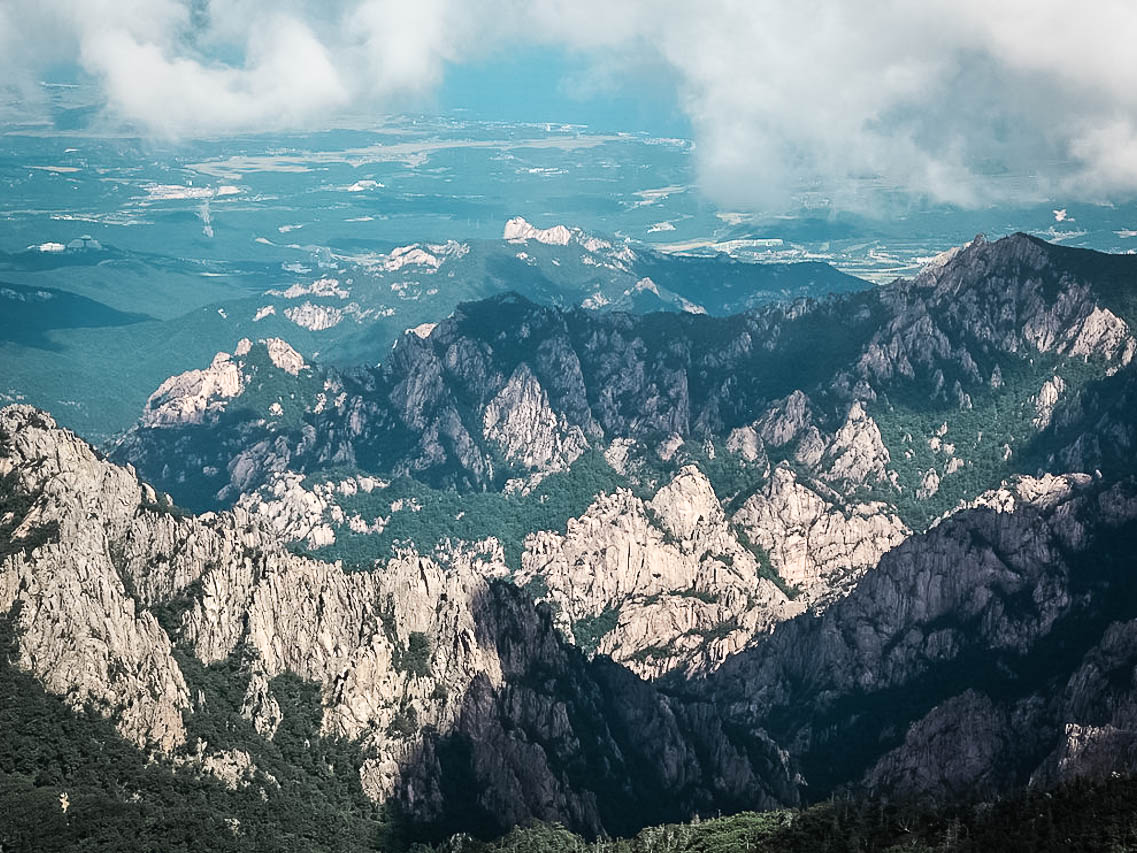 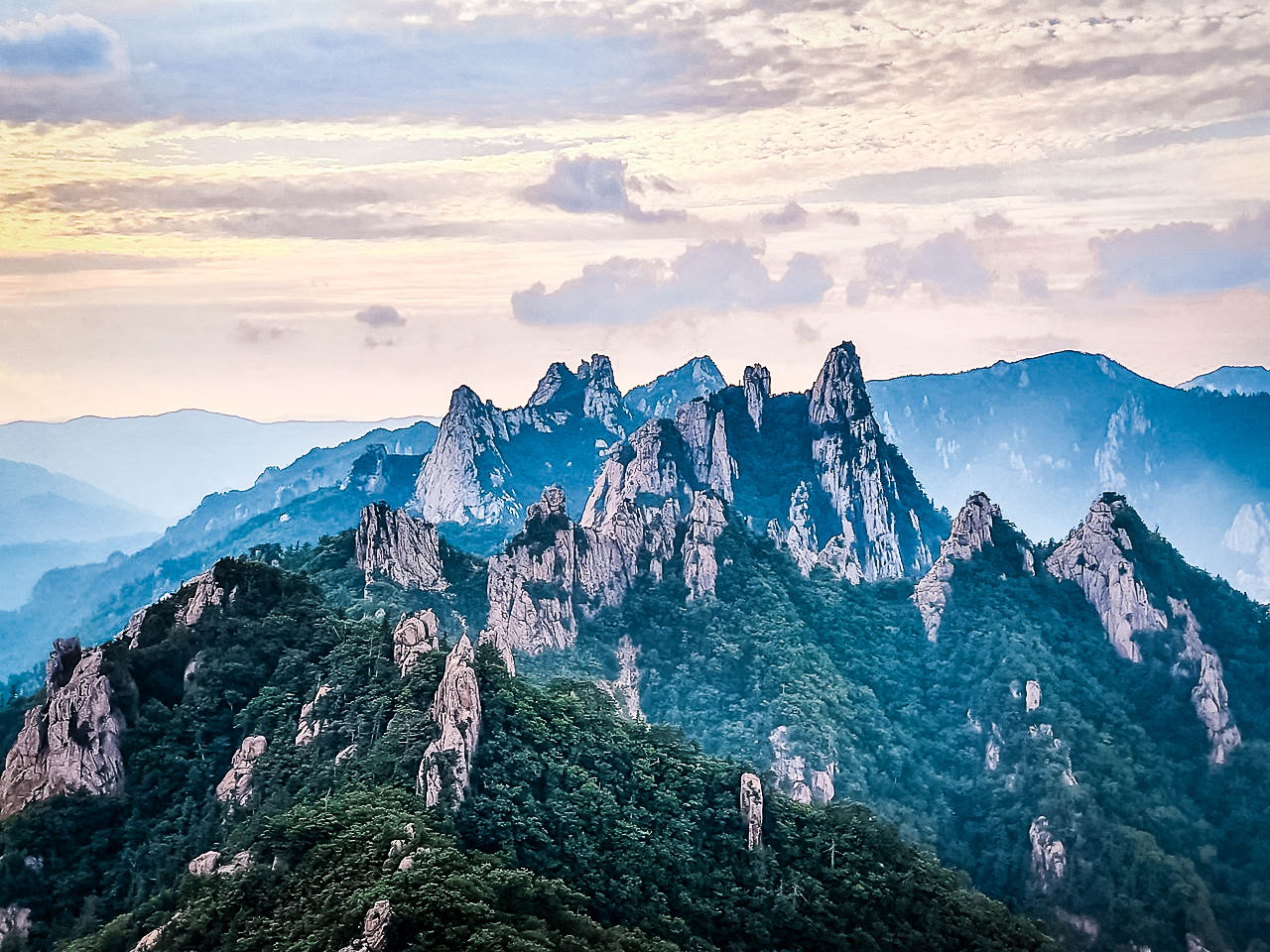 Jeonju (2d) :
Jeonju is a stop to make during your stay in Korea for its old town, Hanok Village, composed of a multitude of hanok, these traditional houses which give the district an atmosphere of yesteryear and which will transport you in the past. A highly cultural city with historical buildings, museums and a Catholic cathedral, you will also find the Gyeonggijeon Shrine and the Geumsansa Buddhist temple. 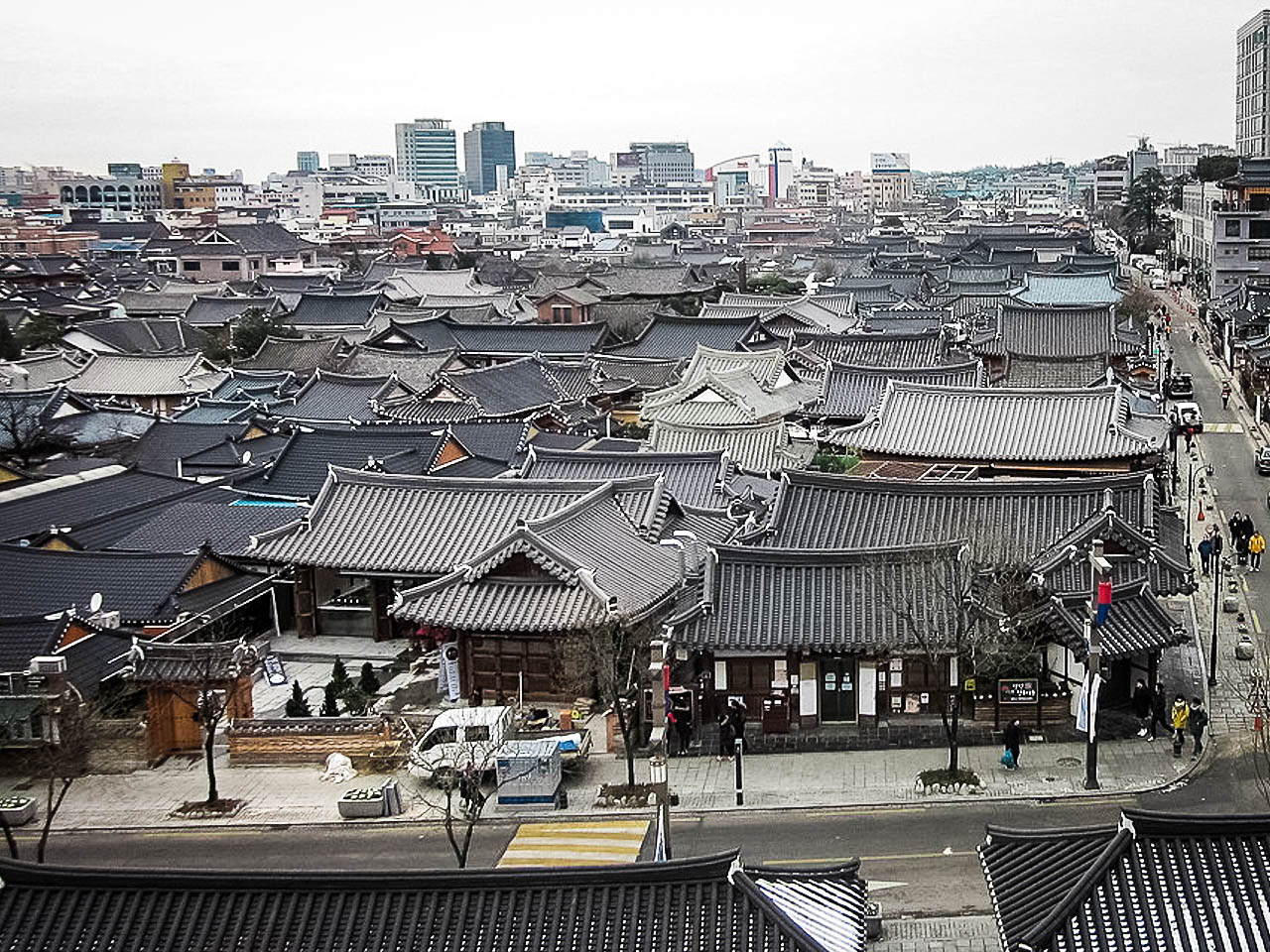 Andong & Hahoe (2d) :
Hahoe is a small traditional village that is located a few kilometers from the city of Andong in the east central part of the country. It is surrounded by the Nakdong River which separates it from the mountains that can be seen from the village. The architecture dating from the Joseon dynasty is preserved and there are only a few hanoks open to tourism. A true testimony of the Korean past inscribed in the UNESCO heritage with the Yangdong village. 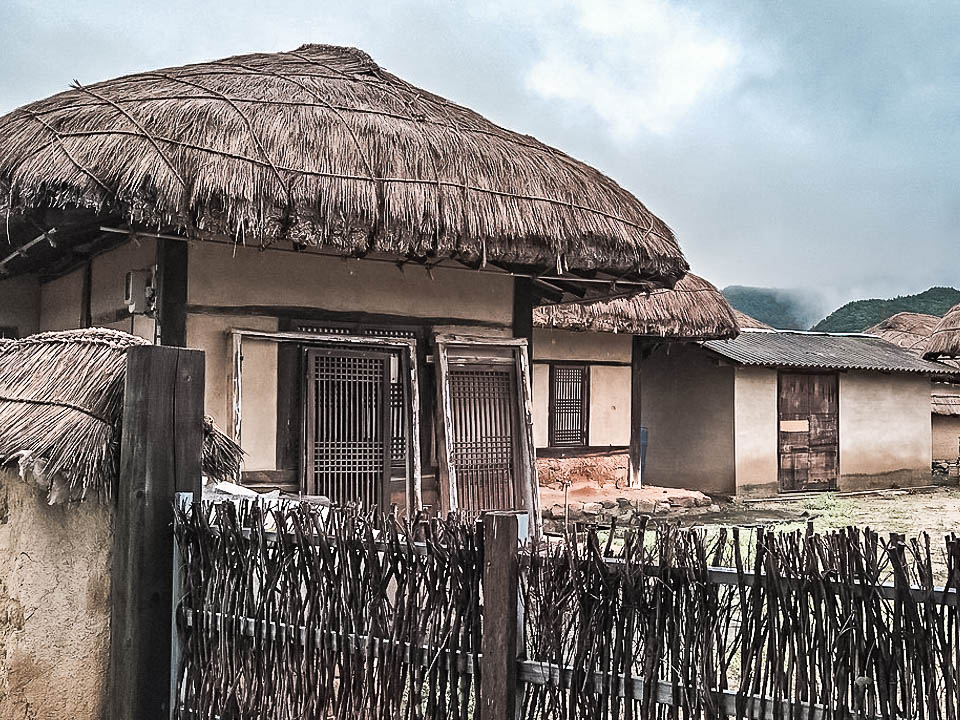 Busan (2/3d) :
Busan (or Pusan) is the second largest city in the country and the most visited place after the capital. A lively port city, especially with its Dongnae district, it is worth a visit for its Haedong Yonggunsa temple on the seaside, the Beomeosa temple in the city center, the Jagalchi fish market, the district with colored houses called Gamcheon, which is nicknamed the Machu Picchu of Busan with a very present street art, Haeundae known for its beach and the Taejongdae Park with its lighthouse and its cliffs. 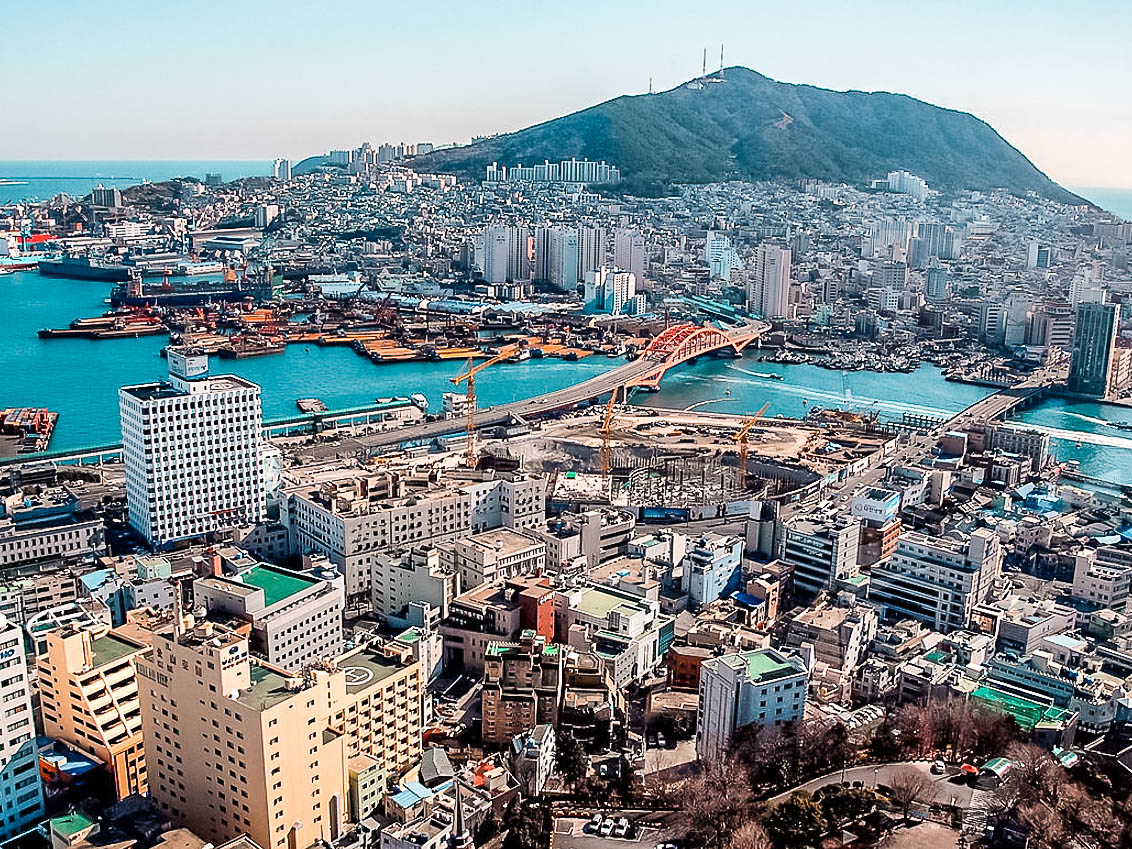 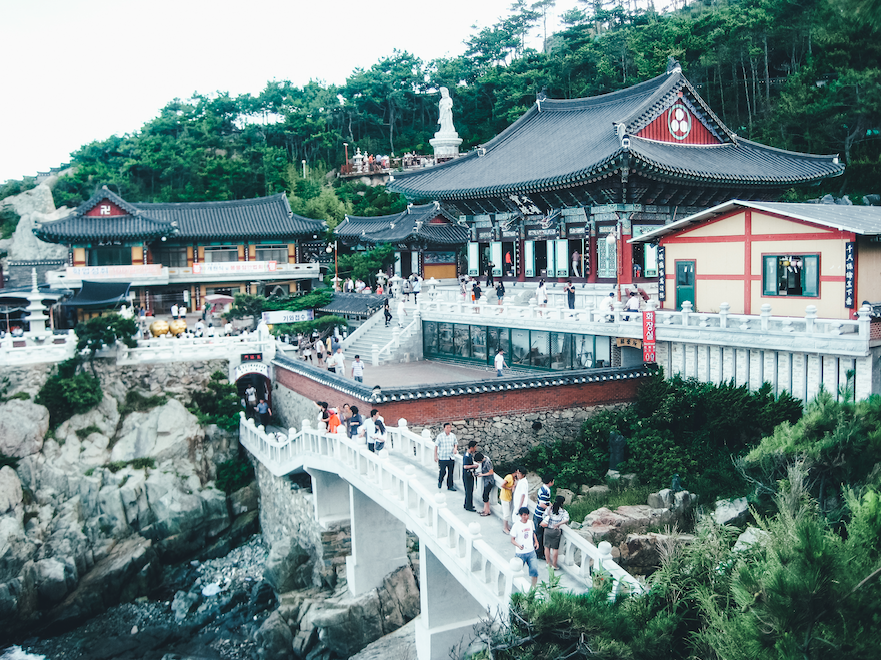 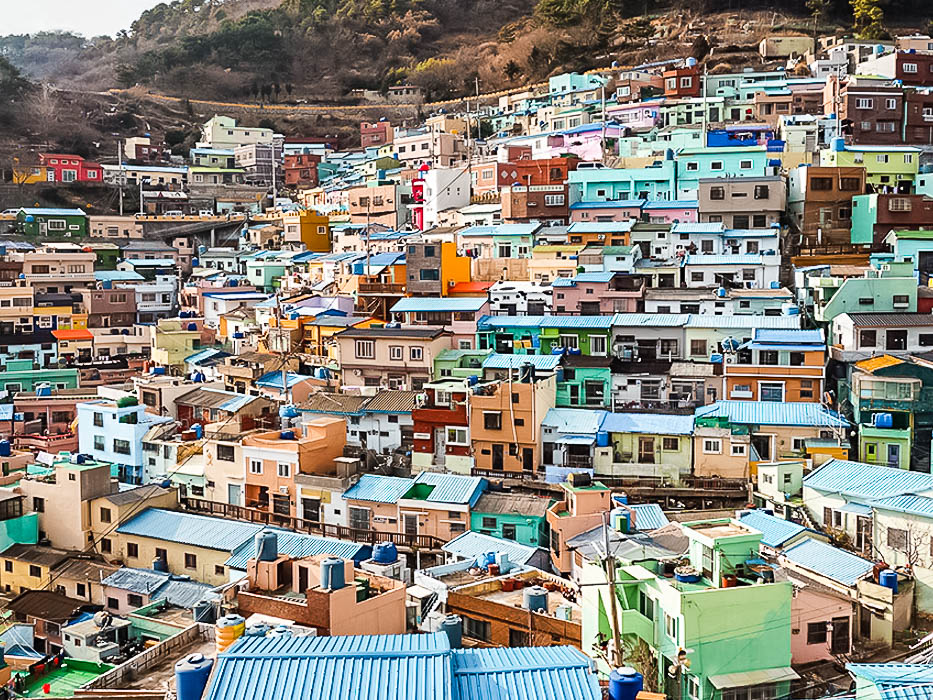 Gyeongju (2d) :
The former capital of the Silla kingdom, Gyeongju has many historical sites to discover. First of all the tumuli, its huge circular tombs dating from the Silla kingdom scattered in and outside the city, the Bulguksa temple and its Seokguram cave which houses statues of Buddhas and other Indian deities. The city is very dynamic and its surroundings are worth a visit, especially the Gyeongju National Park which can be discovered by bike. 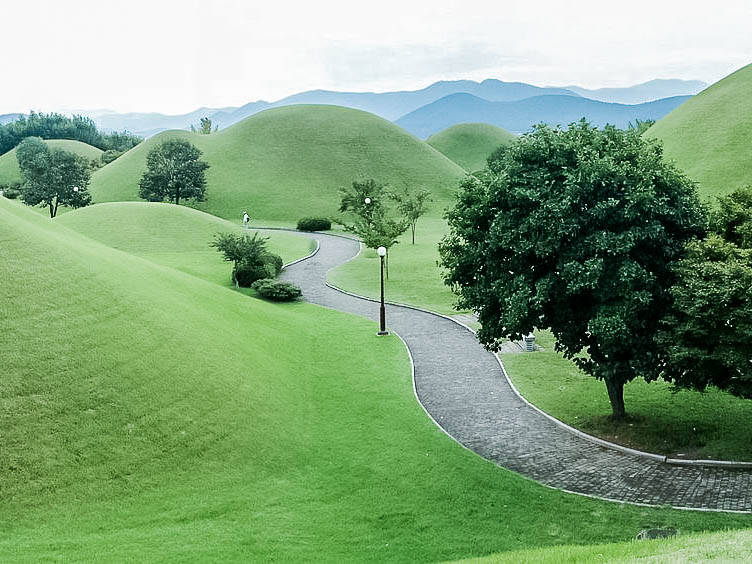 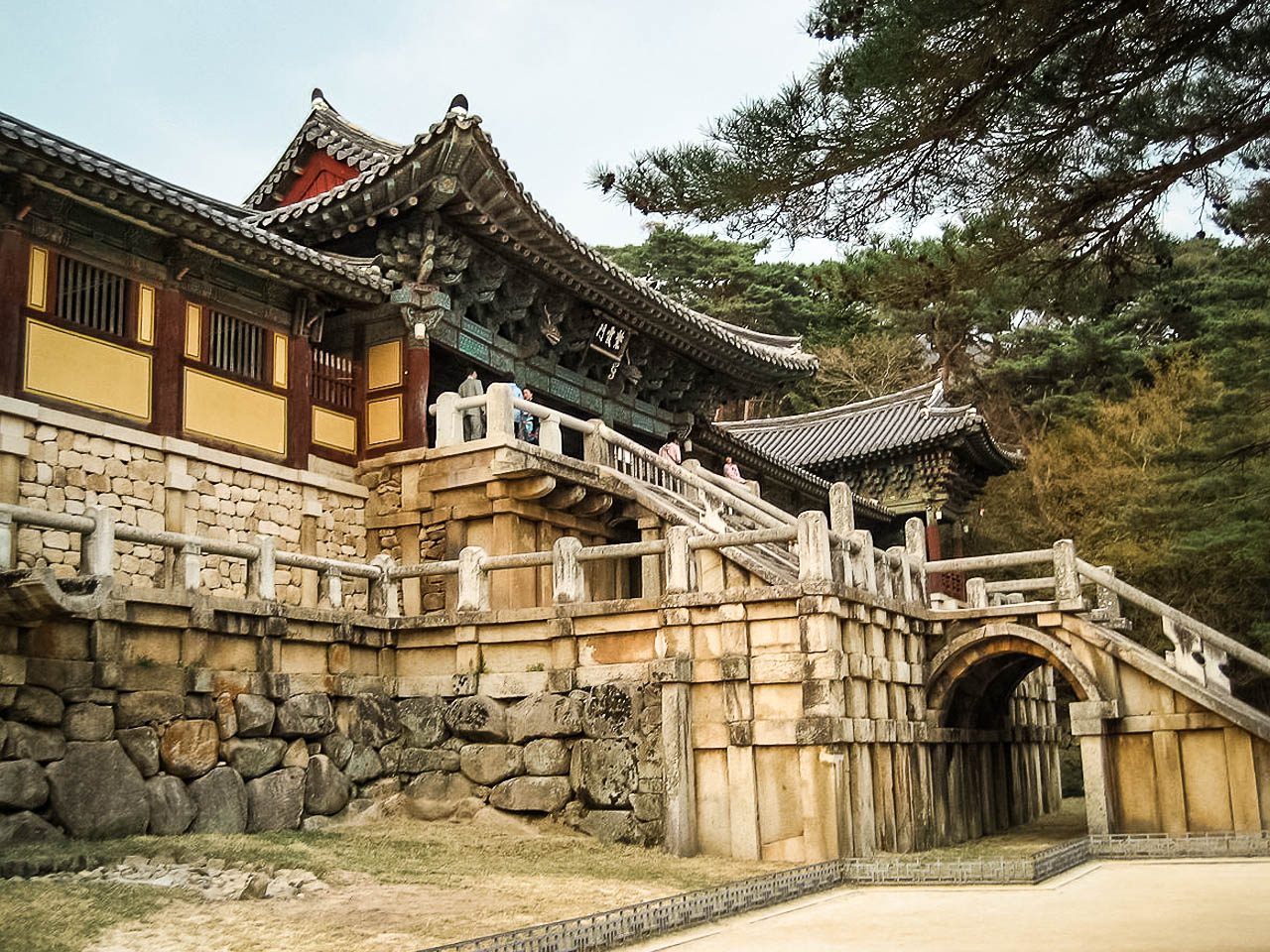 Jeju Island & Udo Island (4d) :
Considered a MUST DO destination in Korea, the volcanic island of Jeju offers beautiful scenery. It is located 85km away from the peninsula and Mount Hallasan, its highest peak reaches 1950m. You will also discover the Seongsan Ilchulbong, a volcanic cone on the east coast, the Manjanggul cave, the longest lava cave in the world listed by UNESCO, many waterfalls, tea plantations, beaches and party places and of course some temples. You can also take a day trip to Udo Island and discover it by bike for half a day. Ferries run every 30 minutes. 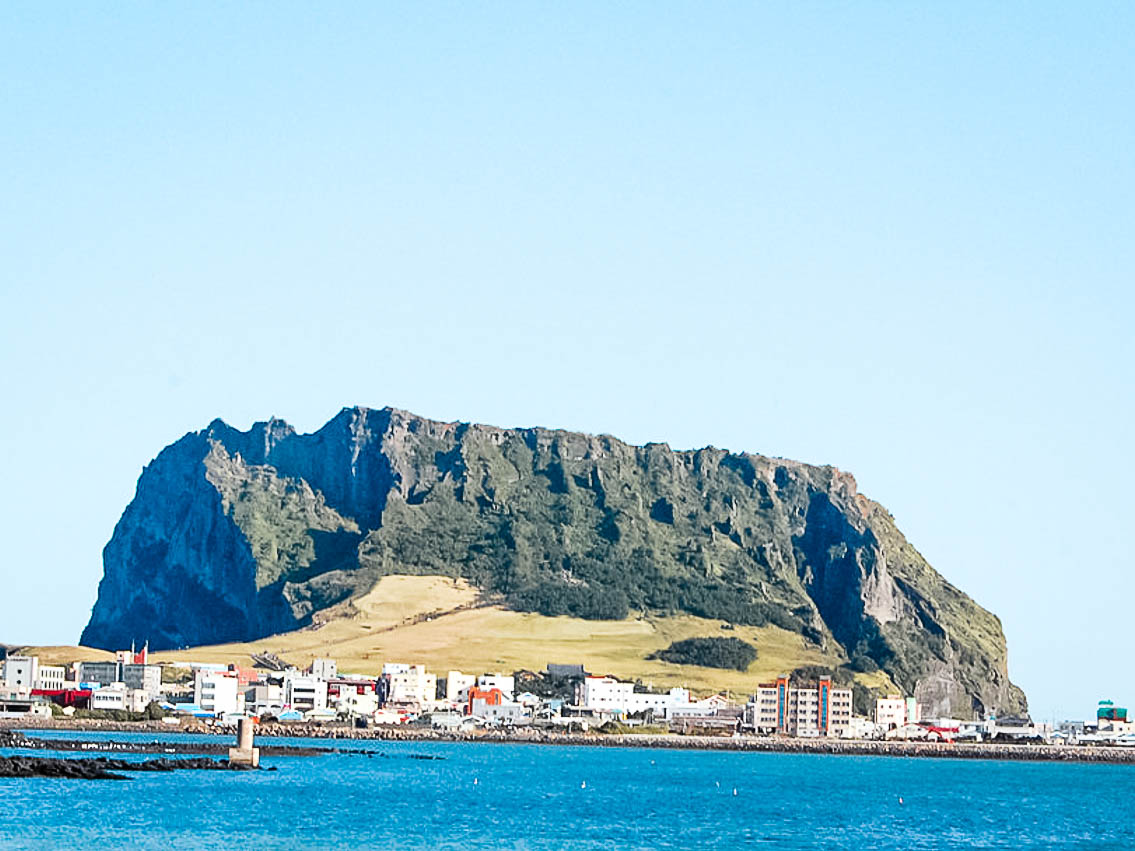 And more: Seonyudo - Suncheon - Boseong
If you have more time, other relaxing places can interest you like Seonyudo, an archipelago at 200km from the capital (1h by ferry) which allows a quick tour of the islands but also an escape with its natural creeks or the ecological bay of Suncheon and the tea fields of Boseong, not far. We would also advise you, if you can because its expensive, to go to North Korea for a few days to see the contrast but for that you will have to go to their embassy in Beijing... in China! Yes ! 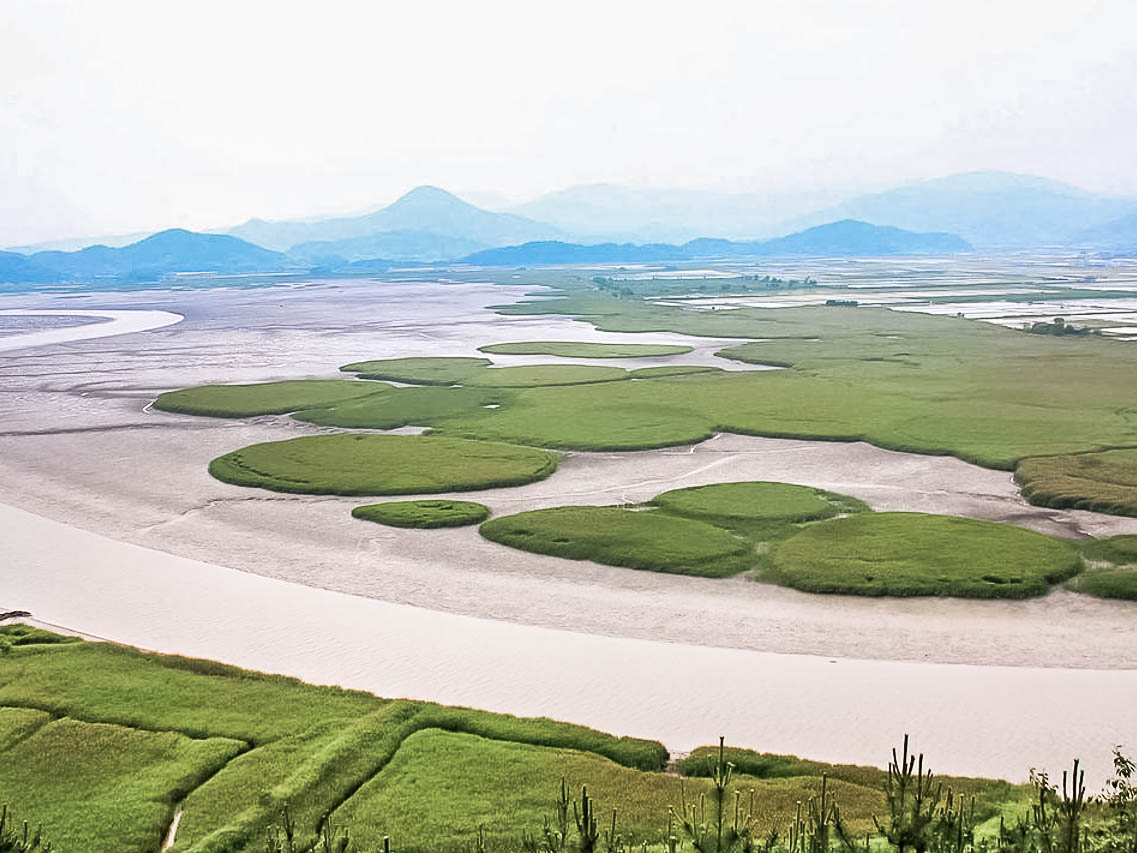 Outro :
South Korea has its own charm with its emerald green temples and traditional houses, the Hanok. We like to get lost in all seasons and the big cities, dynamic, attract us in this festive Korean atmosphere and close to Japan. Enjoy every moment of your stay here and take the opportunity to learn their particular alphabet which is not so complex. Gamsahamnida !